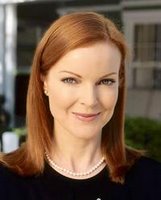 USA Today is reporting that Marc Cherry has cast comic legend Carol Burnett for duty on Wisteria Lane. Burnett will play Eleanor Mason, the icy stepmother of Bree Van De Kamp (Marcia Cross) in an episode expected to air April 9th. Eleanor and Bree's father will turn up on Wisteria Lane after Bree's son Andrew announces his desire to emancipate himself... and reveal a number of family secrets in the process.

Says Cherry of Burnett's character, "Eleanor took over after Bree's mother was killed when Bree was a child. She's a very tightly wound, proper lady for whom appearances mean everything. A lot of what Bree has become came from this woman."

Cherry also gave some hints about what's to come on the show, including a huge, explosive season finale that will put the focus back on the four main housewives, one of whom will be dating a man with "dark secrets." Secrets which will comprise next season's big mystery.

Regardless of Cherry's "big" plans for "Desperate Housewives," as loyal readers know, I won't be tuning in.

"Wing" and a Prayer

Various sources are reporting a veritable influx of departed West Wing staffers will return to the series during the show's final five episodes. Returning castmembers are expected to include Rob Lowe, Weeds' Mary-Louise Parker, Emily Proctor, Marlee Matlin, Gary Cole, Tim Matheson, Timothy Busfield, Anna Deavere Smith, and Annabeth Gish, who will each reprise their roles for at least one episode.

No word on whether NBC has invited Aaron Sorkin back as well...

HBO to Cook Up Comedy

According to the Hollywood Reporter, comic Dane Cook has signed a multi-project deal with HBO that will include scripted series and specials, as well as other projects. Included in the agreement is a feature-length concert film, the development of a scripted series, and a comedy documentary series titled "Tourgasm." This long-term deal is said to be the first of its kind in premium cable.

Cook will next be seen in the film "Employee of the Month," opposite Jessica Simpson, and "Dan in Real Life," with Steve Carell.

Meanwhile, my calls to HBO over the death of Carnivale went unanswered...

Everybody knows how much I love Chris. The perfect start for a smashing night of comedy. Now if only there were something worth watching at 8:30. I refuse to watch Deal or No Deal. (Having only caught a few minutes of this show in which someone kept opening various suitcases, perhaps someone can explain to me how it even works? Not that I'll start watching.)

Ah, entrantress, thy name is Joy.

Now that a certain network that shall go unnamed decided to take Arrested Development off the airwaves, this half-hour is the comedy highlight of my week. Tonight, Dwight needs help with public speaking and turns to Michael for advice. You know you're bad off if you're turning to Michael Scott for suggestions. About anything.

Anonymous said…
I thought Earl was very disapointing last night. Definitely an "off" Earl. I barely laughed. It wasn't my favorite office, either, but I did laugh a lot. Haven't watched Chris yet. I love that show so very much.
3/03/2006

Jace Lacob said…
Ally, I definitely agree. It was a very "off" night for both shows. Earl started off really slow and rather forced and then got a little better in the second half. It was probably the weakest episode so far. Office was a little better but it just didn't feel like the show we know and love. Did anyone notice who wrote last night's episode?
3/03/2006

Anonymous said…
Paul Lieberstein wrote the office ep, I noticed that one. Not the Earl, but Earl was directed by Craig Zisk...
3/03/2006