As if I didn't love Veronica Mars enough. Rob Thomas, writer John Enbom, and the entire Veronica crew not only turned in a simply fantastic episode last night ("The Rapes of Graff"), but also managed to snag Arrested Development's Alia Shawkat (Maeby Funke) and Michael Cera (George-Michael Bluth) in guest starring roles. Which was especially comforting to me coming on the heels of yesterday's official announcement from 20th Century Fox Television that production would not be resuming on a fourth season of Arrested Development.

So it was a particular pleasure then to see Arrested's kissing cousins George-Michael and Maeby on Veronica Mars last night. Michael Cera was wonderful as affable-yet-bumbling Hearst College tour guide Dean and it was fabulous to see Alia Shawkat in a dramatic turn as rape victim Stacy. Theories abound on whether or not she actually shaved off her magnificent mane, but I can't see Shawkat allowing herself to be sheared; it had to be a hairpiece. And didn't you just love when she tossed the frat boy's hair into the ceiling fan? A classic moment that showcased's Shawkat's trademark sassiness.

(My only problem with last night's episode, and correct me if I am wrong, is the fact that Veronica didn't seem to solve the mystery of the rape; she managed to clear Troy of any charges but the episode didn't address the fact that there is still a serial rapist running around Hearst College. Veronica usually doesn't leave any loose ends dangling about.)

Besides for the AD mini-reunion, last night's episode also featured the return of Veronica's no-good drug-dealer ex-boyfriend Troy Vandergraff (Aaron Ashmore) from Season One and seemed to set up a possible framework for Season Three of the series (should it make it onto the CW's fall schedule, which I pray for nightly). While I can see Veronica and Wallace (Percy Daggs) attending Neptune's local college (thank god they didn't call it UC Neptune) next year, getting Logan (Jason Dohring) there might be a little more difficult. Even with his dad, killer Aaron Echolls (Harry Hamlin) in jail and his home destroyed by bikers, it's hard to imagine rich boy Logan (or Dick Casablancas) slumming it in Neptune. But throw in Logan, Troy (he can take the place of Teddy Dunn's Duncan), and Michael Cera's Dean character (and please, for the love of all things holy, bring in the always wonderful Tina Majorino--Mac--as a permanent castmember) and I forsee a smooth transition from high-school to college for both Veronica and Veronica Mars.

So until Arrested's Tobias (David Cross) shows up as a lecturer at Hurst College next season (just kidding there), I can relax a bit after the unfortunate news of Arrested's demise.And because I am such a good sport, to make up for that unflattering photo of Michael Cera and Alia Shawkat (above), below is one that shows them in a better light. 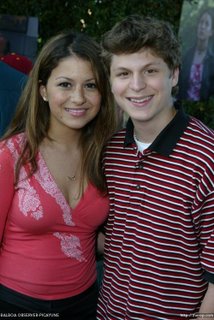 How can you say no to those faces? Come on, Rob Thomas, surprise us by adding them both to the Veronica Mars cast next season!

Anonymous said…
I was thrilled to see those two! Inspired casting, indeed.

As for Veronica not solving the rape...I thought it was just me! I was watching at about 7am, so I thought I missed something. That was weird.
3/31/2006

Jace Lacob said…
Not just you, Ally, I was SO confused when the episode ended and the rapist was still out there. Perhaps we were supposed to think it was the shorn frat boy?

Anonymous said…
Simply a great episode... I don't understand why the rape wasn't solved either... though I did think when Maebe threw the hair in the fan, she was trying to frame him. I thought the cops would come in and see him covered in hair (and DNA). Bring back the return of George Michael in season 3!
4/01/2006

Anonymous said…
An excellent episode...and the addition of George Michael and Maeby just made it that much better. Fingers crossed that one, or the both of them, will join the cast next year. The fact that Veronica didn't solve the mystery of the rapist was a little odd but maybe that will come back later.
4/05/2006

Todd said…
I believe the mystery of the rapist is to return in a prospective third season. Hence the dangles.