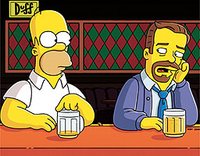 I was more than a little impressed by how much I enjoyed last night's episode of The Simpsons. But then again, considering it was written by (and guest starred) comedy legend Ricky Gervais, I shouldn't have been all that surprised. He is, after all, the man who brought us David Brent, HBO's Extras, and a certain Guinness Record-holding weekly podcast.

(First off, I have to take a moment and just gush about the live-action opening that Fox used last night for The Simpsons. In an episode featuring one of Britain's top comedians, it's only fitting that producers used the live-action opening sequence created by a bunch of Brits for a promo that aired on the UK's Sky network. From the opening images of the nuclear plant's smoke stacks to baby Maggie getting scanned at the grocery check-out and little Lisa whailing away on her saxophone, it was sheer genius. Every moment tracked beautifully and in three-dimensional brilliant color. Having seen it online, I had to rewatch it several times on the television and marvel at its awesome power.)

On last night's episode ("Homer Simpson, This is Your Wife"), the Simpsons win third prize in a contest: a tour of the Fox studios in Los Angeles. Touring the lot (I loved the golden statue of Misha Barton, by the way), they stumble onto a new reality show being cast called "Mother Flippers," itself a take-off on the feud between ABC and FOX over their dueling family-swap shows, Wife Swap and Trading Spouses. (After Lisa mentions that she saw a similar show on another network, a Fox exec offers her an ABC sweatshirt.) Hoping to win enough money for an HD plasma screen television like the one Lenny has, Homer promptly signs Marge up for the show. While the rest of the family have to endure an uptight, repressed Yale-educated woman (she makes them write reports on the TV shows they watch; Homer's report on CSI: Miami--and how he falls asleep only to wake up to see "Letterman talking to Alias"--is priceless), Marge ends up with a well-behaved family: a young son who speaks Mandarin Chinese and is always behaved and her new "husband" Charles (voiced by Ricky Gervais).

Gervais is, of course, hysterical as the self-effacing Charles, who quickly falls for Marge's genuine charms and cheerful personality and tries to woo her. The effect is a cross between The Office's David Brent, complete with tie-pinching mannerisms, off-color jokes, and awareness that the cameras are filming him (did you catch his riff on sensitivity towards women's issues?), and the Ricky Gervais of his weekly podcast: off-kilter and animatedly hilarious. I was rolling on the floor when Charles, a "singer-songwriter," pulled out a guitar, seemingly out of nowhere, to serenade Marge with a home-written tune. Marge, of course, turns down Charles for the dubious charms of Homer and returns home, resetting everything back to just the way it was at the opening.

Except that one thing had changed.

Ultimately, Gervais' episode reminded me of why I love(d) the show in the first place. And that there is still material and situations out there for The Simpsons to mine. I only wish that every episode could be as witty and rewarding as last night's. Then again, Gervais can't write everything. But, until we get his (and co-writer Stephen Merchant's) episode of the US edition of The Office, I'll be rewatching this Simpsons episode a few more times.

Wow, for once Monday ends up being a busy night of telly for me. I'll be either watching or TiVo'ing the following tonight:

The enfant terrible of the cooking set returns for a new batch of episodes on the Travel Channel. In tonight's two-hour special, Anthony travels to Asia... or specifically to the two culinary hubs of the continent: Japan and China, where I am sure he will eat all sorts of interesting and culturally adverse meals.

Because I missed their premieres on Thursday night, I'll check out the second window premieres of new Brit series Ed vs. Spencer and Bromwell High on BBC America. In the premiere episode of Ed vs. Spencer (a Brit remake of Canadian series Kenny vs. Spenny), "Who Can Make Themselves the Illest?" the boys deliberately try to make themselves ill in a competition to see, well, who can make themselves the sickest. Meanwhile, over on animated series Bromwell High ("Tolerance"), the girls prepare a school presentation on tolerance.

On tonight's installment of The Apprentice ("Cruise Control"), the teams race to film a commercial aboard a cruise ship... the only problem is that they have to complete the challenge before the ship sets sail. Ah, that Donald. Always finding new and creative ways to impose deadlines.

Meanwhile, over on CBS' Old Christine ("One Toe Over the Line, Sweet Jesus"), everyone's favorite divorcee Christine is annoyed when her brother Matthew tells ex-hubby Richard that she is on her fifth date with a new boyfriend. I still can't believe I am actually watching a sitcom with a laugh track and everything. It's simply too... weird.

Anonymous said…
Ricky Gervais is my hero! I have not laughed out loud that much at a Simpsons episode in ages. Thank you, Ricky, for breathing some new life into the show. Hilarious. (And the opening was positively brilliant too.)
3/28/2006

Jace Lacob said…
I wholeheartedly agree, Danielle. Simply the best episode of the Simpsons in a long, long time. And what can I say about that opening. Brilliance.
3/28/2006

Anonymous said…
Actually it is the BBCs Extras not HBOs, although shown on that channel. When we have american TV programmes usually they call it NBCs Heroes for example.

The BBC is the best broadcasting company in the world though.
3/17/2008

Jace Lacob said…
Actually, you'll find that it was a co-production between the Beeb and HBO, hence the language I had used, unlike a strict acquistion like the one you are referring to.
3/17/2008