Stuck in an Endless "Loop" 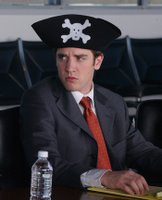 I can swear that someone told me that they were anticipating the launch of Fox's midseason entry, The Loop, but after watching the show last night, I can honestly say that I can't remember why I had any interest in tuning in.

Not to be confused with Fox's other twenty-something single camera comedy Free Ride, The Loop is a hodgepotch of ideas. Here's the skinny: Sam (Bret Harrison), is hired as the youngest executive at a major airline thanks to his thesis, but he's the only one of his friends with a Real Job. Faced with messing up at work, Sam must find a way to party and have fun with his friends while still managing to impress his imposing and frightening boss Russ (the usually brilliant Phillip Baker Hall, slumming it here). Russ wants employees to come up with big "fruity" ideas to cut costs to save the sinking airline company.

Ah, so The Loop refers to the airport strip then? Or is it referring to the feeling of deja vu that I've seen all of this before? What the show does succeed at is its use of that clever motto: reduce, reuse, recycle. It does manage to reduce laughter by an unhealthy percentage as well as reusing and recycling all manner of jokes, gags, and situations. See Sam targeted by Meryl (Mimi Rogers), a predatory older woman at work while maintaining a crush on his oblivious roommate Piper (Amanda Loncar). See Sam have to drive a little girl's bicycle to work because irresponsible older brother Sully (Eric Christian Olsen) took his car. Then see Sam have to ride on a motorcycle with scary boss Russ to a meeting. See Sam wake up with part of his head shaved and have to wear a pirate hat to a meeting. Isn't that funny???

The pilot episode concerns Sam's attempts to get in good with Piper as the gang throws her a birthday party. When Sam manages to use an employee voucher program to get Piper's long-distance boyfriend Marco (guest star David Walton) a free first-class ticket, he unknowingly brings them even closer together... but then Marco forgets to cycle the ticket (there's that loop imagery again!), causing Sam and his way overqualified assistant Darcy (Joy Osmanski) to sift through the airport dumpsters for the voucher. (Though we hear the term "cycle" about three dozen times, we never actually learn what that means.) And then watch in terror as Piper sings kareoke to Annie Lennox's "Walking on Broken Glass," which the show tells us via on-screen text is the worst song ever. Would this have even been funny 15 years ago when the song came out?

Speaking of the recurring on-screen text and freeze-frame technique, this feels like such old hat. When done correctly (see the pilot of Arrested Development for example)--especially coupled with winning narration--this technique can actually add a level of ironic dimension to the story, especially if the images and text are at odds with one another. Here, however, they are painfully obvious. Do we need to be shown (again via text and freeze-frame) that Sam is the hero? Or that Russ is the boss? Or that Meryl is a predator? The text just comes across as lazy storytelling rather than anything else; shortcuts that lead the audience nowhere new or interesting.

Which is, in the end, the problem with The Loop: like its namesake, the audience is circled back to where they started, but without having gained anything.

Ultimately, this Loop is a total zero.

Abso-bloody-lutely none of the above.

Though strangely, I will be watching a whole slew of British programmes tonight (even managed to get some Brit spelling in there too). Over on BBC America, the truly surreal sketch comedy show Little Britain has its third season premiere tonight. (If you haven't seen the show, here's a quick primer.) Lou and Andy, Sebastian, Daffyd, and the gang return, along with a few new denizens of Little Britain like Dudley and his Thai mail order bride, Ting Tong Macadangdang. Gasp in shock and horror as Bubbles de Vere comes face to face with the even more grotesque woman who destroyed her marriage!

Same channel, same great comedy: the truly misanthropic comedy Black Books wraps its fantastic second season tonight. (Again, for the uninitiated, here is a review of the series so far.) In tonight's episode ("A Nice Change"), the boys can't hear themselves because of the builders next door so Fran suggests a vacation, leading Bernard and Manny end up learning some disturbing truths about Fran. (FYI, you can catch Bill Bailey live next month in Los Angeles as part of the UCLA Live series.) Marvel as Manny and Bernard accomplish nothing!

And finally, Sci-Fi is running two back-to-back episodes of the brand-spanking-new (for us Yanks anyway) Doctor Who from 9 to 11 pm. Catch Shallow Grave's Christopher Eccleston as the good Doctor while you still can...before he transforms in just a few episodes' time into Viva Blackpool's David Tennant (a.k.a. the creepy dude from the last Harry Potter movie)!