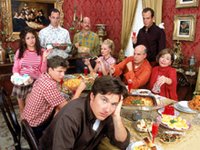 Like the Bluth family, it seems like fans of Arrested Development can't catch a break either. Just a day after a Hollywood Reporter article made it seem as though saying a deal had been reached between Showtime and Mitch Hurwitz would be a stretch, TVShowsonDVD.com is reporting that the third season DVD release of the beleaguered sitcom has been postponed.

While the Arrested Development DVD release hasn't been cancelled (thank you, 20th Century Fox, for that), the release of the third season has been pushed from its scheduled berth in June to an as-yet-undetermined date.

While I can only keep pleading with Showtime to pick up the show for those 26 episodes (over two years)--and with creator Mitch Hurwitz to sign the deal--it seems as though dark clouds are gathering over the horizon for the show, which has in the past managed to escape death several times already. If that is the case, then all we AD fans have left are those treasured DVD releases. And with only thirteen episodes in the shortened Season Three, that's a bit of a cold comfort.

In the meantime, I'll keep making offerings to the Showtime gods...

Anonymous said…
I'd be really surprised if Showtime does come through for the show. I just don't see them pairing something like this (or something this good) with their current shows. But I'd be very happy if they did surprise me.
6/04/2007