The film is described as a "Rashomon-style thriller that depicts the attempted assassination of the president from five different points of view." Quaid and Fox will both portray secret service agents.

This is the second feature that Fox has signed onto; he's currently in pre-production on the Warner Bros. football movie We Are Marshall, which also stars Matthew McConaughey.

No word on whether the assassin is a creepy, black-smoke monster that can see into your past. 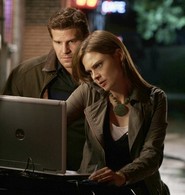 For those of you who are keeping score of series either picked up, cancelled, put on hiatus, or burned off, here is the latest:

Hit FOX procedural series Bones has received an early pickup. The series, which stars Emily Deschanel and David Boreanaz as a forensic anthropolist and FBI officer respectively who solve crimes, has earned a slot on the Fall 2006 Fox schedule.

The same goes for critically acclaimed drama Prison Break, which recently returned from a four-month hiatus after its 13th episode cliffhanger. The series, which charts a complicated prison break (duh) and stars Wentworth Miller, Dominic Purcell, and Robin Tunney, has been picked up for a full 22-episode order for Fall 2006, though the show is expected to take another mid-season break as it did this season.

Not so lucky is the WB's sitcom What I Like About You, which stars Amanda Bynes and Jennie Garth as sisters. The show, which ran for four seasons on the WB, will not be returning next season. The show wrapped its run last Friday with a series finale that effectively tied up the show's plots.

Missing ABC politico drama Commander in Chief, which stars Gena Davis as the first female president of the US, returns from hiatus in a new timeslot on April 13th in the 10 pm hour. Network hopes the struggling show will benefit from a strong lead-in from new reality series American Inventor. Missing ABC comedy Less than Perfect also returns from the ether as well. The Sara Rue-led sitcom returns to the Friday night lineup after a nine-month hiatus on April 18th.

Cancelled-before-it-had-a-chance CBS dramedy Love Monkey, which starred Thomas Cavanagh, Jason Priestley, and the always-divine Judy Greer, was killed after only airing three episodes. However, the show will be burned off on cable channel VH1. VH1 will air all eight episodes of Love Monkey beginning next month. VH1 will air the previously aired shows back-to-back in a three-hour block on April 11th (beginning at 7 p.m.), with the remaining five unaired episodes airing weekly on Tuesdays at 9 p.m. starting on April 18th.

As for CBS comedies Courting Alex and Out of Practice, CBS announced yesterday that it was putting both under-performing sitcoms on the bench for the rest of the season. The network claims that the series will return at a later date, but it seems more than likely that they will burn off the comedies during the summer months.

The Hollywood Reporter is reporting that cabler BBC America has announced several international co-productions, three of which will air in the UK on BBC (the other on Channel 4)and here in the States on BBC America, including four new dramas. The co-productions include:

Waterloo Road, created by Maureen Chadwick and Ann McManus (Footballers Wives). Series will center on an inner-city high school where the teachers have given up trying to make an impact on their students' lives and instead focus on their own ongoing problems. Waterloo Road is expected to premiere on BBC America in June.

Robin Hood, written by Dominic Minghella (Hamish Macbeth). Series will present a "fresh take on the classic tale that being positioned as 'BBC's big primetime drama highlight of the year," a description bolstered by the signficant 13-episode order, more than double the usual episode order from the UK broadcaster. Robin Hood should air sometime in the first quarter.

Jekyll, written and produced by Steven Moffat (Coupling, Doctor Who) and Beryl Vertue (Coupling, Men Behaving Badly) and starring James Nesbitt (Match Point, Murphy's Law) as the title character. Series will be a contemporary take on the classic Robert Louis Stevenson story. Though Jekyll and Hyde share the same body, Hyde is unaware that Jekyll has a family that he will stop at nothing to protect. Jekyll will premiere in the second quarter and is comprised of six 90-minute episodes.

Low Winter Sun, written by Simon Donald (Beautiful Creatures, My Life So Far) and starrring Mark Strong (Syriana, Prime Suspect 6). Set in Edinburgh, Mark Strong will portray a police detective who believes he's carried out the perfect crime when he murders a man for revenge. Low Winter Sun, a co-production with Britain's Channel 4, series will be comprised of two 90-minute episodes and is expected to air in early 2007.

The dramas represent a significant commitment for BBC America to enter into international co-productions with their UK sister network, and BBC America has tripled the number of co-productions since last year with about a dozen this year. However, the cable network will continue to acquire programming as well. BBC America general manager Kathryn Mitchell told Hollywood Reporter, "We're still currently acquiring 800 new hours of programming a year, but we wanted to be creatively involved in some of our programming, instead of just making acquisitions."

I would agree with that desire, but let's hope that the above co-productions are better than, say, Mile High.

Kelley to Explore "Life on Mars" 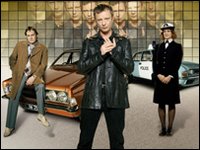 Speaking of British dramas, Variety is reporting that David E. Kelly is developing an American remake of the hit British series Life on Mars as an one-hour drama for ABC. Kelley will write and executive produce the pilot, which ABC has ordered for fall 2007, with studio 20th Century Fox Television.

Life on Mars revolves around Detective Sam Tyler, a contemporary police detective who, after a near-fatal car crash following the kidnapping of his girlfriend by a serial killer, finds himself transported back to the year 1973. Sam is still a cop but is baffled by the new circumstances he finds himself in, especially when the first case he and his corrupt partner land appears to have a link to the same serial killer who captured his girlfriend in the present day.

Meanwhile, BBC America has announced that they have picked up the UK first season run of Life on Mars (above), which stars John Simm (State of Play), and will begin airing episodes later this year.

I'll be TiVo'ing the current trifecta of British comedy goodness over on BBC America: fake psychic show High Spirits with Shirley Ghostman (worth the price of admission alone for the American Idol-style Spirit Academy competition), surreal sketch comedy show Little Britain, and "claymation" documentary Creature Comforts, from the people who brought you the delighful Wallace and Gromit.

8 pm: Do I dare check out Survival of the Richest over on the WB? Probably not. Or, continuing the ghostly theme of Shirley Ghostman, do I switch over to the Travel Channel to take a peak at the oft-parodied British medium Derek Acorah in Derek Acorah's Ghost Towns? Tonight, Derek explores the ghosts of the town of Royston, in Hetfordshire. Ooooh... spooky.

On a new episode of Doctor Who ("Aliens of London"), The Doctor is generous enough to take Rose home to London circa 2006, but when an alien ship crashes into the Thames, all hell breaks loose. Rose, when will you learn that family visits usually end in carnage and destruction?