Before They Were "Lost": Sawyer Vamps It Up on "Angel"

Not every star of ABC's hit castaway drama Lost was always as famous as they are today. In fact, the actors pretty much ran the gamut from the widely-recognized TV stars to international film stars to actors of the never-seen-'em-before variety.

We all know that Matthew Fox (Jack) played Charlie on FOX's series Party of Five and that wee Dominic Monaghan (Charlie) was a hobbit in the Lord of the Rings feature film franchise (before that he played Geoffrey on Brit mystery series Hetty Wainthropp Investigates), but what about the lesser-known actors?

Well, Evangeline Lilly (Kate) appeared on a Canadian dating commerical (no joke), while Jorge Garcia (Hurley) was discovered after an appearance as a drug dealer on Curb Your Enthusiasm. As for a few of the others: Terry O'Quinn (Locke) had appeared in numerous TV roles, usually as a military officer, on such shows as Alias, The West Wing, JAG, and Harsh Realm; theatre actor Harold Perrineau (Michael) was best known for his work on HBO's Oz and in films like Romeo + Juliet and The Matrix series; and Daniel Dae Kim (Jin) memorably appeared on 24 and Angel--

Wait, what's that, you say? Angel? The now defunct WB Buffy-spin off starring David Boreanaz as the titular hero, an L.A.-based vampire with a soul saving the hopeless and continually preventing the end of the world? Didn't someone else in the Lost cast appear in that very same show? 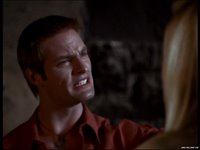 You would be right. Lost's very own amoral con artist Sawyer (a.k.a. actor Josh Holloway) appeared on the drama, in its very first episode, "City of..." playing a character known only as Good Looking Guy who, like Sawyer, wasn't all that he initially appeared to be. In the series' opening scene, Angel stakes out a local watering hole by pretending to be drunk. He spies a young woman talking to a group of suspicious young men--including Good Looking Guy (Josh Holloway)--and follows them outside. Good Looking Guy couldn't be a vampire, could he? Not when he's so, you know, good looking, right? 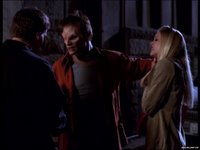 The young woman is taken aback when the men transform into vampires, who are about to attack the girl when Angel appears, staking two of the vamps off the bat (heh, bat). But our Sawyer isn't having any of that and attacks Angel as well, who throws him onto a car windshield. The damsel-in-distress tries to thank Angel but he yells at her to get away and then stakes Sawyer, turning him to dust. And Angel, being the typically brooding guy that he is, swirls away and stalks down a darkened alley into the night.

Poor Sawyer. He never does get the girl, does he?

The second-to-last episode before Amy Sherman-Palladino and Daniel Palladino leave Stars Hollow for good. In tonight's episode ("Driving Miss Gilmore"), the Gilmore girls play nursemaids with Lorelai acting as her mom's driver after Emily undergoes minor eye surgery, while Rory looks after boyfriend Logan's recovery after his sky-diving accident. Meanwhile, Luke helps his kooky sister Liz after she announces she's preggers. Ha! Told you so; I knew the pregnancy alluded to in the promos for this week's episode had nothing to do with Rory or Lorelai. Take that, WB promo department!

Will the entire Neptune gang make it out of this season alive? Who can say, but it looks like the death of a character could go down in this week's episode of Veronica Mars ("Happy Go Lucky"). At Aaron's murder trial, Veronica, Keith, and Logan take the witness stand; Neptune High janitor Lucky gets trigger happy; and ever-vigilant sleuth Veronica discovers a suspicious e-mail on the mayor's computer. Is Woody Goodman the mastermind behind the bus crash? And will we ever learn why that dead guy had Veronica's name written on his hand?

Anonymous said…
That is too funny! I was a huge "Angel" fan and loved Daniel Dae Kim as an evil lawyer on the show but never realized that Sawyer (Josh Holloway) played a vampire in the first episode. Hysterical. It's actually pretty amazing how many people started their careers as vamps on either "Buffy" or "Angel."

The last episode of "Alias" also proved to be an "Angel" reunion with Gina Torres and Amy Acker. Glad to see that the excellent cast of "Angel" is still alive and kicking!
5/02/2006