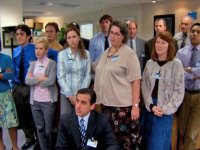 Is it really season finale time already? I feel like we just made it through mid-season. We've already made it through a rather blah Gilmore Girls season ender and a sensationally good Veronica Mars but I have been waiting all week with sweet, sweet anticipation for the season finale of The Office ("Casino Night"), written by Mr. Michael Scott himself, the very talented Steve Carell.

Considering I was initially opposed to the idea of an American version of The Office, I have to say that it has managed to not only become one of my favorite series over the past two seasons, but also managed to clog up my TiVo because I can't bring myself to delete most of these hilarious episodes. (Believe me, that's high praise indeed.)

So did the season finale live up to my (admittedly very high) expectations? Oh, it surpassed them. Here are my top five reasons why The Office season finale made me laugh and cry... and then beat my head against my coffee table for having to wait all summer for a new batch of episodes.

#5: Formerly lovelorn Michael finds himself involved in a love triangle.

I know, shocking. Who would have thought that Michael could pull one woman, much less two? Michael invites former flame (if fooling around one night counts as a flame), Jan (Melora Hardin) to attend the Casino Night that Michael is throwing in the warehouse of Dunder-Mifflin for charity. For Boy Scouts. .. or Comic Relief... or AIDS. Or Afghanis. Jan declines the offer, but just as Michael invites his attractive realtor, Carol (Carell's real-life wife Nancy Walls), to attend, Jan changes her mind and accepts Michael's invitation.

Upon meeting one another, Jan and Carol are both taken aback but try to play it cool, but their bluff becomes apparent as each becomes somewhat jealous of the other. The tension between the two women at the event is so palpably funny and uncomfortable that it actually made Michael seem oddly cool and collected for once. Could Jan really like Michael? (She did kiss him on Valentine's Day, after all.) Could Michael end up with Carol? (She did seem pretty chuffed to see how good he was with her kids that day at the ice rink.)

But, ladies, get some perspective. This is Michael Scott we're talking about, after all.

#4: The Office's supporting cast is equal to none.

Even more impressive is that the season finale gave nearly all of them a moment to shine. Michael berates HR drone Toby for being the way he is, namely a downer who likes to rob Michael of any chance of fun... only to later beat Michael at a single hand of poker, a victory that actually gives sad sack Toby a feeling of happiness. Office romancers Kelly and Ryan continue their patently doomed (and one-sided) relationship, as Ryan is forced to order for Kelly a "seven and seven with eight Maraschino cherries and a sugared rim, blended if possible," and Kelly wants to donate her winning to Kobe Bryant's charity because he's "hot."

The loathsome and creepy Creed steals... everything (enough to win the mini-fridge prize from Vance Refrigeration, the first fridge he's ever owned), a beautiful-looking Phyllis beats World Series poker champion Kevin at poker, Stanley acts, well, like Stanley and puts Michael in his place, Kevin's god-awful garage band, Scrantonicity, gets hired to play at Pam and Roy's wedding, and even disabled office manager Billy Merchant gets a moment to shake his head in dismay when Michael refers to his attractive date as his "nurse."

It's a testament to their prowess that, even when they only have a few lines of dialogue--or none at all--each of these extremely talented actors can make even a great Office scene shine even more brilliantly. The Office just wouldn't be the same without you guys.

#3: Angela slaps Dwight after he kisses her in front of everyone... and then she walks away, smiling.

#2: The quiet moments have just as much importance to the show as the laughs.

Jan drives two and a half hours on a whim to come to a charity event at a lousy local branch of a paper manufacturer because Michael thought it would be "fun." And then when he doesn't pursue her and instead focuses his attention on Carol, who refers to the Casino Night as their "first date," Jan quietly thanks Michael for inviting her and sadly stalks out to her car in the dark. An overnight bag sits on the seat next to her and she stares at it a second before angrily throwing it in the back seat. And then she makes the long drive back to New York alone again.

It's beautiful, subtle moments like these that remind me of how this show can deftly cross from hilarity to earnest emotion in a heartbeat.

#1: The tension between Jim and Pam finally come to a head. (As if you're surprised that that's my number one reason.)

After dancing around the issue for two seasons, Jim finally confesses his love for Pam in the parking lot... and Pam doesn't know what to say. Wait, Pam is surprised by all of this? As she tells him how much she values their friendship (ouch) but says that she's sorry if he misinterpreted things (way to emasculate the guy, Pam). Jim tells her to stop and apologizes for misinterpreting their friendship, as he brushes away a single tear. Jim storms off, leaving a conflicted Pam standing the parking lot, toying with her engagement ring. (And she doesn't even know that he's transferring out of Scranton because of her!)

Later, Pam goes upstairs to the office and calls her mom, filling her in on what just happened. As she says that she doesn't know what to do and that Jim is "great" and is her "best friend," Jim walks in and Pam quickly ends the call. Pam attempts to say something but Jim just walks over and kisses her! And then Pam kisses him back! As they pull away and look at one another, the screen fades to black.

All in all, just the perfect closing to a nearly perfect season.

While we won't learn the resolution of Jim and Pam's passionate kiss or discover whether Pam makes it to the altar or Jim transfers out of Scranton until this fall, at least we have those nifty Office webisodes coming out this summer to tide us over in the meantime.

Will that be enough to satisfy my Office fix? Well, thankfully, I've got those dozen or so episodes saved on my TiVo. So, fire up your telekinetic abilities on the coat rack, bring the paper supplies, and unwrap your Dwight bobblehead, because I smell a marathon coming on...

In this week's episode of my new sci-fi favorite ("The Doctor Dances"), as the ghostly alien child's plague continues to spread like wildfire through Blitz-era London, the Doctor and Rose are forced to team up with Captain Jack Harkness, an intergalactic con-man.

The American premiere of the British political series that the Los Angeles Times referred to as "The West Wing meets The Office." After the Prime Minister unexpectedly sacks the British Minister for Social Affairs, a new Minister, yes-man Hugh Abbot (Chris Langham), is brought in to replace him. But he soon runs afoul of the PM's Chief Political Advisor, Malcolm Tucker (Peter Capaldi).

Anonymous said…
Office was fantastic last night. A turly perfect episode. I rewound and watched that kiss a couple of times - that's chemistry.
5/12/2006

ticknart said…
I think I agree with everyone that last night's episode was one of the best forty minutes of TV out there.

I think I rewound the "I'm in love with you" line three or four times before I finished the episode.

The thing that really got me, though, was when Pam was on the phone with her mother and says, "Yeah, I think I am." just before she sees Jim walk in.

And personally, I'd move the Angela slapping Dwight to the number 2 slot because those few seconds said more about her character than any line of dialogue ever could.
5/12/2006

Anonymous said…
I also never thought that an American version of "The Office" could ever come close to the hilariously brilliant British original. But here it is. In all its glory. I think that this season the American "Office" really came into its own and has proven to be just as funny and poignant as its predecessor. Way to go!
5/16/2006