Bravo to Whip Up Second Batch of "Top Chef" 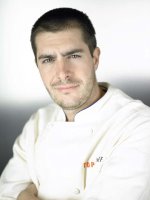 Cable network Bravo has ordered a second course of its hit reality series Top Chef, according to a report in Variety.

The series, which pits aspiring chefs against one another for a cash prize and the title of top chef, will return next season with a ten-episode run of more culinary catastrophes. Additionally, Bravo has scheduled a reunion special for the show's current season, which is scheduled to air on May 10th, and has expanded the season finale to two one-hour individual episodes, which will air May 17th and 24th.

The finale is expected to pit the final three chefs in a culinary showdown in Las Vegas. While I am routing for Lee Anne to take home the title, my predictions for other members of the final three competitors are Harold and Tiffani. (Tough luck, Dave.)

In other series renewal news, ABC has announced that they have given a full third season order to sophomore legal drama Boston Legal. The series, which stars James Spader, William Shatner, and Candice Bergen, is scheduled to air its two-hour season finale May 16th.