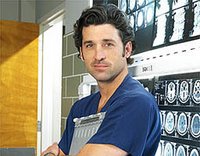 The surprise and excitement of network upfronts week continues! The past few weeks of conjecture and rumor will finally be dissipated as the networks officially announce their fall schedules to advertisers in New York over the next few days. NBC announced their fall schedule yesterday, so ABC's up today.

ABC President of Entertainment Steve McPherson will unveil the new lineup later today, but, in the meantime, below is a sneak peek at the fall schedule. McPherson had this to say about ABC's schedule:

"Our success has been driven by great storytelling and memorable characters that audiences have fallen in love with. We set out to develop a diverse group of shows that will continue in that vein and also to grow our audience. We want viewers making appointments with ABC Television every night of the week."

Will that last part be true? Take a look below and listen to your heart about whether you'll be tuning in to ABC every night of the week.

For those of you keeping track of such things, here's how the ABC schedule stacks up.

Midseason Launches/Returns: Traveler, Day Break, In Case of Emergency, George Lopez, According to Jim, Set For the Rest of Your Life, Just for Laughs, Greg Behrendt's Wake Up Call, American Inventor, Supernanny

Reactions:
Overall, I have to say that ABC has shown a lot more grit and taken a lot more risk than NBC... at least in terms of their fall schedules.

Moving Grey's Anatomy off of its plum Sundays at 10 to another timeslot (Thursdays at 9 pm)? Risky, especially since many thought they'd move it to Mondays, but I think this is a better choice rather than have the series go up against 24. Will NBC's Studio 60 sink under the pressue of the hit medical drama?

Bringing back What About Brian over other middling dramas such as Commander in Chief or even Invasion (which seemed to me anyway to have a rather hardcore cult audience)? Odd.

Hasn't ABC ever heard of a little something called counter-programming? Why schedule Big Day and Notes from the Underbelly smack against NBC's My Name is Earl and The Office, easily the two most buzzed-about comedies in recent memory?

That said, I think that The Nine and Six Degrees have both landed rather cushy timeslots, after Lost and the newly relocated Grey's Anatomy respectively. As for Brothers & Sisters, will Desperate Housewives' sagging audiences stick around for a family drama at 10 pm?

Bringing Lost back in October and running larger chucks of original episodes together is a wise idea and at least fans won't have to wait until November...

While the schedule seems potentially more viable than this past season's, I can't say I agree with McPherson's belief that ABC will provide appointment television every night of the week (Mondays, Tuesdays, and Fridays are all a bust for me). Will ABC have found another breakout hit this season? Or another Commander in Chief? Only time will tell...

Stay tuned all week for additional Scorecard sessions as the networks unveil their fall schedules. Next up: CBS.

Anonymous said…
I don't watch Grey's, so I have no real vested interest, but I do think it's risky to put it up against the CSI mothership. Still, gotta admire risk!
5/16/2006