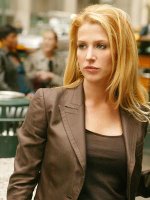 Welcome to Day Three of network upfronts week! The past few weeks of conjecture and rumor will finally be dissipated as the networks officially announce their fall schedules to advertisers in New York over the next few days.

As NBC unveiled their schedule on Monday and ABC announced their fall schedule yesterday, it's first place network CBS's turn to shine today.

New Timeslots for Returning Series:
The Amazing Race, Cold Case, and Without a Trace (all moving in a block to Sundays from 8-11 pm); How I Met Your Mother (moves to an earlier timeslot on Mondays at 8 pm)

Reactions:
Blech. I have to say that it's the most complete unimaginative schedule thus far, but then again, why mess with what many view as perfection? To me, it's a bland mix of procedurals, procedurals, and even more procedurals with a few reality stalwarts (Survivor, The Amazing Race) thrown in there for good measure. CBS has brought back 18 returning series, including 6 freshmen series that have made the cut, resulting in a schedule that appears oddly familiar to the casual viewer. But then again, they're the number one rated network, so why mess with success.

I had assumed that CBS would likely jettison the Sunday night movie franchise, a move that's about two years late, given how the night has struggled against ABC's drama powerhouse Desperate Housewives. I was hoping that CBS would use the real estate to launch at least one new show, but instead opted to fill the night with Amazing Race and procedurals Cold Case and Without a Trace, a less risky move than anticipated. But Amazing Race on Sundays? Could be a good fit but not a combination that immediately springs to this Race-obsessed mind.

As for the new crop of shows, I can't say I am particularly taken with any of them but Jericho, an ensemble-cast drama about a post-apocalyptic town, has the potential to lure me in for a viewing to see if I'd watch on a regular basis. I've never been the biggest CBS fan (not watching procedural shows certainly doesn't help matters) but so far I've yet to see anything on Wednesdays at 8 that would bring my attention elsewhere, so I'll give it a try.

All in all, fairly lackluster and rather predictable. But at least CBS can say that their new shows aren't all procedurals...

Stay tuned all week for additional Scorecard sessions as the networks unveil their fall schedules. Next up: CW and FOX.

On tonight's episode of the British import, Trinny and Susannah help two women find dynamic and gorgeous (yet appropriate) outfits to wear to their husbands' events.

On the two-hour season finale of The Amazing Race ("5 Continents... 10 Countries... And More Than 59 Thousand Miles"), the final three teams (Hippies, Frat Boys, and, er, Ray and Yolanda) face off on the last two legs of the race, which brings them back to snowy North America. Which team will win the million dollar cash prize at the end of the race? And which teams will make enormous mistakes and be forced to cross the finish line to the lackluster applause of ousted teams? Find out here tonight!

Only two episodes of the season remain! On the penultimate episode of the season ("Three Minutes"), Michael manages to pull the wool over Jack and the other castaways' eyes and launches a daring plan to rescue his missing son Walt, while Eko's decision to stop building his lil' church in the woods (in light of last week's events) frustrates Charlie. Hmmm, do you think will be a problem that everyone knows where Sawyer stashed the heroin now?

On the season finale of Bravo's reality series, the final three chefs compete against one another in a dramatic showdown in Las Vegas for the dubious title of Top Chef. Who will win? (Definitely Harold.) And who will cry like a little girl? Will it be Dave? Or Tiffani? Or Harold? Yeah, it's got to be Dave.

Vance said…
Totally agree. Total Blech. On the other hand, can you blame them for sticking with what works? apparently people still flock to CBS for some reason even though its the most stodgy network still, though I do like the move of Amazing Race to Sundays at 8pm.
5/17/2006

Anonymous said…
I dunno - I actually like the move of AR to sunday at 8. I don't watch anything at that time, and it seems like a good end of weekend show. Good Sunday family hour and all that. It was too crowded where it was.
5/17/2006