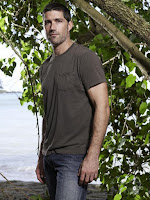 Good morning and welcome to your Friday morning television briefing. I can't believe the weekend is nearly within reach, though yesterday's heat here in LA is still making me woozy.

Matthew Fox has successfully negotiated a raise for his role on ABC's hit drama Lost, replacing his $150,000 per episode price tag with a new pay check of about $225,000/episode, a raise that puts him on equal footing with the stars of the Alphabet's Desperate Housewives. Look for the other cast members on Lost--which starts production on Season Five on Monday--to receive boosts as well. (Hollywood Reporter)

Katie Holmes has some company. Sigourney Weaver will be the latest A-list star to sign on for a guest appearance on next season's Eli Stone, following the ABC series' coup in signing Holmes for an upcoming episode. Weaver will play a therapist to whom Eli (Jonny Lee Miller) turns to for help. (Entertainment Weekly's Hollywood Insider)

Alan Taylor (Mad Men) will direct the HBO comedy pilot Bored to Death, starring Jason Schwartzman as a Manhattan writer who, after suffering through a bad breakup with his girlfriend, decides to reinvent himself as a private detective, following the path of his (ficitional) heroes from the works of noir novelists Raymond Chandler and Dashiell Hammett. Project was written by novelist Jonathan Ames. (I actually quite liked the idea for the project but felt that Ames' script could have used some punching up as it read a little too slow for my liking.) (Hollywood Reporter)

Madchen Amick (Twin Peaks, ER, Gilmore Girls) will replace Yara Martinez in NBC's upcoming fall drama My Own Worst Enemy; she'll play the wife of Christian Slater's character Henry, who has an alter ego named Edward, a slick super-spy. News comes after showrunner Jason Smilovic was replaced by John Eisendrath on the series, which is set to launch on October 13th. (Hollywood Reporter)

Alex O'Loughlin (Moonlight) has signed a talent holding deal with CBS, CBS Paramount Television, and ABC Studios, under which he will star in a new series to be developed by Mark Gordon (Grey's Anatomy) and will pitch feature projects to CBS Films. (Hollywood Reporter)

Anonymous said…
Matthew Fox should make more than all of the housewives put together for the excellent work he does on Lost!
8/18/2008