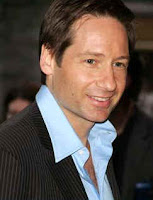 Good morning and welcome to your Friday television briefing. The weekend is just within our grasps now, so just a few more hours to go. I spent last night watching some pilots for ABC's recently announced series orders--including the Nathan Fillion-starring Castle and ensemble cop dramedy The Unusuals--so look for thoughts on those and more in the next few days.

In other casting news, Olympian Michael Phelps will follow his upcoming hosting duties on Saturday Night Live with a cameo on an episode of HBO's Entourage slated to air later this year. (I got the first two episodes of Entourage's upcoming fifth season--launching on September 7th--yesterday but won't get to watch until this weekend.) (Entertainment Weekly's Hollywood Insider)

Ricky Schroeder, who recently appeared in A&E's miniseres The Andromeda Strain, will direct Sci Fi Channel telepic Hellhounds, about an ancient Greek warrior who battles the hellhounds of Hades in order to save his bride and bring her back from the Underworld. Pic will star Men in Trees' Scott Elrod and was written by Paul A. Birkett. It will be distributed by RHI. (Hollywood Reporter)

The cast of British cult comedy Red Dwarf will reunite for a series of four half-hour specials, according to a report, to be aired on digital channel Dave in 2009. (Digital Spy)

Vanessa Marcil (Las Vegas) has signed on to join the cast of NBC's Lipstick Jungle in a recurring capacity as Josie, an attractive music manager who offers Shane (Paul Blackthorne) a job scoring music on an indie film. And David Arquette has signed on to guest star on My Name is Earl as a stuntman whom Earl wants to cross off his list for sleeping with his girlfriend... but he suffers from short-term memory loss, which could be a problem for Earl. (Entertainment Weekly's Ausiello Files)

BBC drama head Jane Tranter is said to be in talks to move to Los Angeles in order to oversee a new BBC Worldwide West Coast drama production division in 2009. In her role at the Beeb, Tranter developed such hits as Life on Mars, Doctor Who, Spooks (a.k.a. MI-5) and Cranford. She could also take BBC Wales drama head Julie Gardner (who executive produces Doctor Who) with her to Los Angeles as well. (Hollywood Reporter)

On this week's episode ("Surprise!"), Roger and Susan plan a surprise party for Janet but the celebration's results are more shocking than actually, you know, surprising.

Danielle C.F. Maris said…
BBC's Jane Tranter has had quite a track record. It will be interesting to see what she does from LA.
8/29/2008

Anonymous said…
Castle is going to be great! Look forward to your report
8/29/2008

Anonymous said…
@Castle Fan. I don't get it. How are you a fan of a series that won't even air until next year? Did you read the script? See the pilot? How do you know that "Castle is going to be great"?
8/29/2008