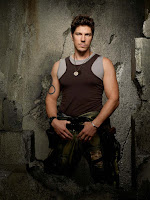 Sci Fi has finally gone ahead and announced the Battlestar Galactica two-hour "event" that it had been dancing around the past two months without officially confirming a concept, air date, or cast. (Just don't call it a two-hour movie; it's an "event" apparently.)

BSG writer/co-executive producer Jane Espenson (Buffy the Vampire Slayer) will pen the script for the BSG two-hour event (ahem) and BSG cast member Edward James Olmos will direct. The still-as-yet-unnamed event is scheduled to air sometime in 2009, after the conclusion of Battlestar Galactica's fourth and final season which will air its final ten episodes in 2009 as well. (So still no air dates there either. Pity.)

On board to star so far: Dean Stockwell, Michael Trucco, and Aaron Douglas, with others to be named at a later time. I wouldn't be surprised if Olmos pulls double duty on the event and makes an appearance as well and I'd expect to see another Cylon turn up as well. My guess is Rick Worthy, who plays Simon... and likely Grace Park, who plays Boomer/Athena, given Aaron Douglas' appearance (if you remember, their characters were romantically involved).

So what's it about exactly and does it, like Battlestar Galactica: Razor before it, take place in the past? Yes, indeedy. Here's what the official press release had to say:

"Starting before the events of the miniseries, our story focuses on familiar characters including Cylon Number One, known as Cavil (Stockwell), Resistance Leader Sam T. Anders (Trucco) and Chief Galen Tyrol (Douglas). In the beginning, the Cylons had a plan, but it didn't account for one thing: survivors. During the chaotic aftermath of the destruction, two powerful Cylon agents struggle with plots and priorities on the human ships that got away, and among the resistance fighters who were left behind."

Production on the two-hour event is slated for the end of the summer in Vancouver and, following the model established by Battlestar Galactica: Razor, a DVD will be released shortly after the event airs on Sci Fi.

Danielle C.F. Maris said…
I'm thrilled that this will be written by Jane. Her work on Battlestar has been fantastic!
8/08/2008