Welcome to the "Jungle": A Sneak Peek at Brooke Shields on "Project Runway" 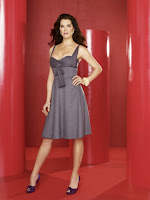 In the latest cross-promotional opportunity on the series, Brooke Shields, late of NBC's femme drama Lipstick Jungle (and previously of FX's Nip/Tuck), guest judges on this week's installment of sartorial showdown Project Runway.

Will the designers be able to please the stylish star with their fashionable designs for powerful business women? Or will they end up stranded in the jungle with too many animal prints and 1980s accessories?

Shields is no stranger herself to high-end fashion herself or drama, as shown by this clip, where she pays an "unexpected" visit to the designers at Parsons.

And if that weren't enough, another sneak peek at this week's episode of Project Runway, as Tim checks in on the designers in his own inimitable style:

9 pm: Flipping Out Reunion on Bravo.

On the Flipping Out Reunion Special, watch Jeff, Jenni, Zoila, Chris Keslar and the others gather to take a look back at the sophomore season's good times and bad times and those truly awful times, like the firing of Chris Elwood. What really happened there? Find out tonight.

Anonymous said…
"It's the jungle!" Wow. I can't believe she actually said that. And I can't believe that Suede said "I'm a big fan" instead of "Suede is a big fan." Looks like he's making progress.
8/12/2008