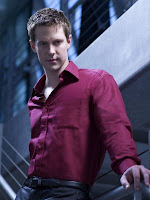 Welcome to your Thursday morning television briefing. I had a wonderful night of telly viewing last night, between another fantastic episode of Pushing Daisies, Old Christine, and Dirty Sexy Money. (I'm saving Top Model, which I'm growing bored of, for later in the week.)

Jason Dohring fans have some positive news for a change. The former Veronica Mars star--who appeared in last season's short-lived vampire drama Moonlight--has signed on to star in HBO comedy pilot The Washingtonienne, based on Jessica Cutler's semi-autobiographical book of the same name. Also cast in the comedy about the lives of a troika of sophisticated 28-year-old women on Capitol Hill: Kate Burton of Grey's Anatomy. (Hollywood Reporter)

In other casting news, Lost's Dominic Monaghan has been cast to guest star on the February 2nd episode of NBC's Chuck (which will be presented in 3-D), where he will play Tyler Martin, a "free-spirited British rock star targeted for death by a shadowy group of evildoers." Michael Ausiello sits down with Monaghan to get the scoop about his return to television, why he thinks Tyler is "like Charlie in a hallucinogenic dream," and whether or not he'll be returning to Lost any time soon. (Entertainment Weekly's Ausiello Files)

Variety's Season Pass has a fantastically in-depth interview with Mad Men creator about the series. Among some of the extremely interesting points: we haven't seen the last of Freddy Rumson. Could the man who memorably wet himself before an important meeting be returning to Sterling Cooper? Hmmm. (Variety)

Lindsay Lohan's recurring arc on ABC's Ugly Betty has allegedly been cut from six episodes to four, following some on-set issues with the tabloid-prone actress. Behind the rationale for the reduced episodic count: Lohan allegedly failed to get along with series star America Ferrera, frequently turned up to work with an entourage, made a mess of her dressing room, refused to go on set until Ferrera arrived for work, and supposedly wasn't wearing underwear in a key scene when Ferrera's Betty was meant to pants Lohan's character. (New York Post)

UPDATE: E! Online has now confirmed that Lohan's episode count on Ugly Betty has been downgraded. "She was not so interested in creating a character," said a source. "She was more interested in just playing herself, and that doesn't work on a show like this with such heightened reality." (E! Online)

Production on Season Seven of HBO's Curb Your Enthusiasm will begin in December, with seven episodes slated to air sometime in 2009. The series last aired an original episode last November and has yet to announce an executive producer roster or a projected season launch. (Variety)

Sci Fi has ordered a pilot for a spinoff of reality franchise Ghost Hunters that will focus on a group of college students traveling across the country in search of paranormal activity. Like its parent series, Ghost Hunters: College Edition will be executive produced by Craig Piligian. (Hollywood Reporter)

Keith Samples has stepped down as president of television at Media Rights Capital, the programming entity responsible for foisting the CW's Sunday night block of programming on the public. Said lineup--which includes In Harm's Way, Valentine, and Easy Money--have landed with a thud, attracting a 0.2/1 among adults 18-49 and only 692,000 viewers. (Ouch.) Easy Money went so far as to attact a 0 share this past Sunday night. Susanne Daniels remains at MRC as a consultant and Dawn Parouse continues as MRC's development head, though she allegedly turned down an offer to become Samples' replacement. (Variety)

Shannyn Sossamon (Dirt) and Scott Mescudi have been cast in HBO's comedy pilot How to Make It in America, opposite Bryan Greenburg and Victor Rasuk. (Hollywood Reporter)

Anonymous said…
I'm happy to see that two of my favorite TV guys - Dominic Monaghan and Jason Dohring - will be back on the small screen soon!
10/23/2008

Unknown said…
I first read "Sci Fi has ordered a pilot for a spoof of reality franchise Ghost Hunters that will focus on a group of college students traveling across the country in search of paranormal activity." I think that's a much better idea for a series!
10/23/2008