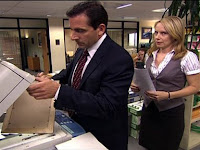 There, I said it. Whether she's all grungy and fierce as in Gone Baby Gone, low-key and aching for excitement (as in Season Two of HBO's The Wire), or all awkwardness and longing as Holly Flax in The Office, I'm always entranced by her subtle and amazing performance.

Which brings us to this week's episode of The Office ("Business Ethics"), which was written by first-time Office scribe Ryan Koh who previously worked on this summer's Kevin-centric webisode series. It certainly wasn't the best Office episode we've ever seen and it wasn't the worst, but I did feel like it could have used a hell of a lot of tightening and another polish or so.

The basic premise this week found Holly (the aforementioned Amy Ryan) attempting to oversee a branch meeting to discuss business ethics ("Let's get ethical!"), which Michael quickly turns into a situation where everyone is spilling their guts about the unethical things they do at work in exchange for immunity. (I loved how Holly attempted to explain to Michael that nothing that happens at work can ever be granted immunity.)

During said free-for-all, it comes out that Meredith has been sleeping with a vendor in exchange for a reduced price on supplies... and Outback Steakhouse gift certificates. The latter part felt a little too gratuitous and smacked of blatant product placement. It really was apropos of nothing and the shots of Stanley et al chowing down on Outback Steakhouse food in the episode's tag pushed this way over the line for me. (Bad NBC!)

I did like that Michael and Holly had their first argument of sorts in debating what to do about Meredith and that Holly ultimately saw just how futile it is to attempt to take on the company in an era of corporate malfeasance. Sure, Ryan may have gotten the boot for massive fraud but Dunder-Mifflin tells her that they want to look the other way about the Meredith situation as they're coming out on top as a result; the entire business ethics training was a sham to just get people to sign a form indemnifying the company against any damages stemming from personal wrongdoing.

I do wish however that the scene between Michael and Holly at the restaurant had been a little funnier... and that we could have seen them actually fight during the car ride back to the office after the debacle of a meal. (Though I did love how Michael casually swept all of Holly's food into the trash instead of telling her to put them in the fridge for the following day when he invited her to lunch. And then through away her leftovers. Michael Scott: Food Waster.)

I thought that the Jim/Dwight storyline was a little weak, especially as Jim didn't ever clock to the fact that Dwight's inexplicable twenty minute break was in fact an illicit rendezvous with Angela. Had he figured this out, then I would have been a hell of a lot happier about this subplot, which didn't really amount to much and won't go down as one of Jim's better pranks any time soon. The best bit for me was seeing Dwight squirm as Jim made all sorts of glaring errors in his description of Battlestar Galactica to Andy. ("Pretty much a shot for shot remake of the original Battlestar.")

All in all, a fair episode of The Office but nothing to get too excited about. Hell, I even missed Pam, who literally phoned it in this week from art school in New York long enough for Jim to tell an uninterested crowd that he and Pam had gotten engaged.

But the best bits were once again Amy Ryan's as Holly incredulously reacts to Michael ignoring her (I loved how she stood, open-mouthed, as he walked away with the coffeepot and later cut in front of her to use the copy machine to copy... a picture off the wall) and later admits that Michael is her "best friend in the office." Had Michael heard her confession, I dare say that he would have acted differently. But then again, this is a man who went with the humorous version of "I told you so" rather than sympathetically drop it altogether. Though he did freak out just enough to get everyone back in the meeting room so Holly could finish the ethics meeting. And that has to count for something, no?

Next week on The Office ("Baby Shower"), Michael prepares for the birth of Jan's baby by asking Dwight to review possible birthing scenarios with him. And Michael tells Holly that he will pretend to dislike her for Jan's benefit. This will not end well.

Anonymous said…
Yeah, the Jim/Dwight storyline never really went anywhere. There should have been a better payoff. Overall, a pretty lackluster episode.
10/10/2008

Anonymous said…
I actually liked this week's episode better than the one that aired two weeks ago. It felt more like an old ep from the earlier seasons to me and I agree that Amy Ryan is just awesome!
10/10/2008

Cass said…
what about the two lobster dinners sitting in front of Michael at lunch? I was waiting for him to ask that they split the check evenly...while Holly just had a salad.
10/11/2008

TVBlogster said…
I agree with your review. There were moments that were funny, but there was something missing. But even when an "Office" episode isn't spectacular, it's still the best show around. (Along with "30 Rock").
10/12/2008

The CineManiac said…
I too love Amy Ryan, she is really amazing on The Office. But can I say how painful it is to watch Michael continually screw it up. I think tearing up the tickets last week was the worst.
Am I the only one that wants to see Michael happy?
10/13/2008