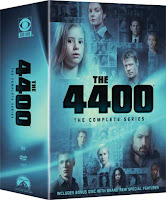 There are a few series over the years who have gotten an unfair shakedown by their respective networks, canceled prematurely while still having a significant story potential in their bones. One such series is USA's The 4400, beloved by its small coterie of fans yet largely ignored by the general populace.

CBS Paramount Home Entertainment today releases The 4400: The Complete Series, which wrapped its run last summer on USA, in a handsome box set with a host of extras. I'm hoping that its sheer weight and heft (it's about the size of the last Harry Potter book) will entice some people who missed this smart and sophisticated series when it was on the air.

Conceived by Scott Peters and René Echevarria, The 4400 told the story of a group of people pulled from the timestream at various points in the 20th century who were then returned to the present day in a great ball of light that seemed to fall from the sky. Returned to 2003, these people (4400 in number) began to display a vast array of abilities, from seeing the future and healing to super-strength and empathy. Assigned by the Department of Homeland Security to investigate the cause of the returnees' disappearance and reappearance (and tasked with dealing with any legal issues stemming from their return), Agents Tom Baldwin (Joel Gretsch) and Diana Skouris (Jacqueline McKenzie) find themselves initially at odds with one another as Skouris doesn't trust the returnees and is fearful of the risk they pose to the general populace and Baldwin--aided by the fact that his nephew (himself the key to unlocking what put Tom's teenage son Kyle in a coma) is one of the returnees--is more trustful of these people and their situation.

While at its heart a sci-fi series,The 4400 is distinctly character-based, exploring what it would be like to disappear from your life and return, without having aged a day (and without any knowledge of what happened to you or that any time had passed), and dealing with the fallout from returning to a world and a life that had moved on without. In Season One, this is seen most clearly via the experiences of Lily (Laura Allen), who disappeared six months after the birth of her daughter and returns after twelve years to a family that doesn't include her: a tween daughter with no knowledge that she even existed and a husband who has remarried. It's also etched on the face of Richard (Mahershalalhashbaz Ali), who vanished in the 1950s from Korea while embroiled in a love affair with his white lover (who happens to be Lily's look-a-like grandmother) and discovers a world in which his forbidden affair is far more pedestrian today.

Which isn't to say that there's no sci-fi action going on here, because that's the furthest thing from the truth. Later seasons definitely play up the science fiction elements of the series' premise, introducing various warring factions in the future who are messing with the timestream to either prevent or ensure a catastrophic event and seeding people back into time in order to push civilization's development and achievements in particular directions.

But while sci-fi geeks will admire the series' logic-twisting storyline of time travel, human experimentation, and mutant abilities, drama lovers will appreciate the care with which each of the characters is developed and given its own weight. The cast is especially strong and one can't help but identify with each of the characters as they attempt to find their way in a new world order that is based on fear and mistrust (much like post-9/11 America). Ultimately, The 4400 is about people and their experiences and the series goes on to tackle such issues as government involvement in citizen's lives, religious cults, persecution of minority groups, and ideological war.

Extras on the box set include an introduction from series creator Scott Peters as he thanks the fans for their continued support of the series (a fan-generated effort to save the series sadly didn't pan out); The 4400: The Ghost Season featurette in which Peters discusses the genesis for the concept of The 4400 and takes the viewer through the series' development (including some areas where he thought the series went wrong); deleted scenes; audio commentary by Scott Peters and Joel Gretsch on the pilot episode and commentary by producers Ira Behr and Craig Sweeney on the series' finale; and featurette Promicin: The Moral Choice.

Anonymous said…
I miss the 4400! It really was an excellent show with an interesting, original concept and a brilliant cast. The first season was particularly good and I'm looking forward to going back and watching it again.
10/28/2008