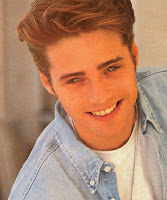 Welcome to your Thursday morning television briefing. Once again, I am feeling burnt out after an overstuffed night of TV viewing that included new episodes of Pushing Daisies, Top Model, Old Christine, Project Runway, and Dirty Sexy Money. Whew.

Jason Priestley has signed on to direct an upcoming episode of the CW's 90210 but don't expect to see him in front of the camera any time soon. Priestley will direct the series' 18th episode, slated to air in the spring. While Priestley's Brandon Walsh won't be turning up in that hallowed zip code, Shannen Doherty is said to be returning for two episodes later this season (though executive producer Gabe Sachs wouldn't comment officially) and producers are also said to have locked Jennie Garth for six additional segments. (All that hubbub about Garth not coming back? Allegedly just a "misunderstanding.") (Entertainment Weekly's Ausiello Files)

On the eve of the premieres of US versions of Life on Mars, Kath & Kim, and Eleventh Hour, the New York Times takes a look at the prevalence of format importing but says that "not all copycat shows are equally well made" but that "the closer an original fits into indigenous American settings and sensibilities, the better." It gives high marks to Life on Mars but says that Kath & Kim and Eleventh Hour are both pale imitations of the originals. (New York Times)

Cabler Spike has ordered an untitled two-hour drama pilot about the Irish mob in Boston from executive producers Tom Lynch and Dana White. Project, from MGM Television, will chart the war between various factions vying for power when the head of the mob steps down from his position. Pilot will be directed by Walter Hill (Broken Trail). (Hollywood Reporter)

Over at ABC Family, the cabler has ordered two pilots including a half-hour single-camera series adaptation of feature film 10 Things I Hate About You, from writer/executive producer Carter Covington (Greek) and director Gil Junger, and Ruby and The Rockits, a half-hour multi-camera comedy written and executive produced by Shaun Cassidy and Ed Yeager. The latter project--about a former teen idol who gave up music to settle down with his wife and kids but finds he can't leave his past behind when a former bandmate shows up in his life with a teen daughter--stars Alexa Vega (Spy Kids), Austin Butler (Zoey 101), Patrick Cassidy (Smallville), and David Cassidy (The Partridge Family).

Jimmy Smits (The West Wing) talks about his role on Season Three of Showtime's Dexter, where he plays Assistant D.A. Miguel Prado. Of the role, Smits says in this interview that the character of Miguel "is something different than I've done before on television and what television audiences are used to seeing me as." (Associated Press)

NBC has shifted the premiere of its reality competition series Momma's Boys by two weeks to Wednesday, November 12th at 9 pm. (Futon Critic)

WGA has banned its members from working on FOX's Osbournes-fronted variety series, The Osbournes: Loud And Dangerous, produced by Fremantle North America. According to a letter sent to its members, the WGA asserted that "Fremantle wanted to treat certain portions of the show as 'reality content,' not cover the writers who create it, and lower the compensation of the WGA-covered writers, arguing that they would only be responsible for writing part of the show." (Deadline Hollywood Daily)

USA Today's Robert Bianco says that NBC's US adaptation of Aussie hit comedy Kath & Kim is "the worst sitcom." Ouch. I'm tempted to agree but there are far other sitcoms floating about in the ether that are just as bad as Kath & Kim when you stop to think about it. (USA Today