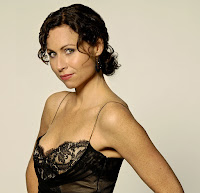 Entertainment Weekly's Michael Ausiello is reporting that Minnie Driver (The Riches) has landed a plum guest role on ABC comedy Modern Family, where she will play "a friend and former co-worker of Claire’s (Julie Bowen). The two reconnect after years of being out of touch and things are not exactly how they remembered." Driver's episode is slated to air in January. (Entertainment Weekly's Ausiello Files)

Jeffrey Tambor (Arrested Development) will star opposite David Tennant in NBC's legal dramedy Rex is Not Your Lawyer, where he will play the psychiatrist of the panic attack-prone titular lawyer (Tennant) who is described as "a specialist in anxiety disorders who himself suffers from them and who also becomes romantically involved with Rex's mother." David Semel will direct the pilot, written by Andrew Leeds and David Lampson. (Hollywood Reporter)

ABC is said to be close to handing out a pilot order to a contemporary remake of Charlie's Angels, with Josh Friedman (Terminator: The Sarah Connor Chronicles) attached to write and executive produce the new project, which hails from Sony Pictures Television. Also attached to executive produce: Leonard Goldberg, Drew Barrymore, and Nancy Juvonen. (Variety)

Syfy has quietly cut back the episodic order of Battlestar Galactica prequel series Caprica by one episode, bringing the total to 19 installments. (Chicago Tribune's The Watcher)

ABC has given a script order to a comedy pilot based on Howard J. Morris and Jenny Lee's book "Women Are Crazy, Men Are Stupid," which will focus on a couple with the failed marriage behind them who are looking to make it work the second time around. Morris and Lee will adapt their own book, with Morris and Elliot Webb attached as executive producers. (Variety)

Maggie Friedman, the executive producer of the newly cancelled supernatural drama Eastwick, has clarified remarks that she made to Entertainment Weekly's Michael Ausiello about being "furious" about the axe falling on her series. "The other day, when we were discussing the cancellation of Eastwick, I misspoke in the worst possible way," wrote Friedman. "The word 'furious' was poorly chosen by me. You had said to me that 'the fans are understandably furious' and so I agreed that I was too, but the truth is, I’m not. I see that word now in print attributed to me and it’s very painful, because it seems to imply I am angry with ABC and nothing could be further from the truth. They treated me really well. I am not the least bit furious, with anyone. That’s simply not the kind of person I am. Yes, I’m sad about the show being cancelled, because it was creatively fulfilling and tons of fun to make and an amazing group of people, but I’m not angry." (Entertainment Weekly's Ausiello Files)

SPOILER! E! Online's Kristin Dos Santos and Megan Masters are reporting that there's going to be a rather revealing love scene between outbound Melrose Place stars Colin Egglesfield and Ashlee Simpson-Wentz coming on the nighttime soap before the duo depart the series. "Things get pretty violent and kind of crazy," Egglesfield told E! Online. "Auggie ends up hitting the bottle and falls off the deep end a little bit." (E! Online's Watch with Kristin)

The CW is developing medical drama series HMS, about a group of promising medical students at Harvard Medical School which is being described as a younger Grey's Anatomy. Project, from Warner Bros. Television is written and executive produced by Amy Holden Jones (Mystic Pizza) and co-executive produced by Heroes star Hayden Panettiere. (Hollywood Reporter)

W Loomis said…
Hmmm....still nervous about eh David Tennant project but the addition of Jeffrey Tambor to the cast certainly helps. Now I just hope that the script is as good as the cast.
11/13/2009

Hadley said…
I think Modern Family is doing a good job with guest roles. They cast interesting people who really work for the part rather than just doing it as a stunt like some shows do. I can totally see Minnie Drive playing an old friend of Claire's and I loved Shelly Long as Claire and Mitchell's mom. Hopefully, she'll be back!
11/13/2009