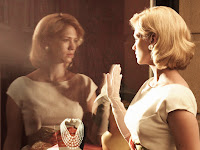 I was extremely lucky to have the opportunity to conduct an exclusive interview with Mad Men creator/executive producer Matthew Weiner about the third season finale of the AMC period drama. (Which hopefully you read here.)

Now, two weeks after the season finale aired, you can get a look at some never-before-seen details from that interview, which includes some rather illuminating information about the third season..

Head over to The Daily Beast, where you can read my piece "Mad Men Postmortem, Part Two," as Weiner discusses the theme of change in Mad Men’s third season, his narrative use of the Kennedy assassination, the decision made by Betty to leave her husband, Don (Jon Hamm), Greg enlisting in the army, that bloodthirsty John Deere, and much more.

Let me know what you think and head over to the comments section to discuss.

Dusty Jay said…
Nice! Thanks for this! I am totally missing Mad Men and am happy to at least have these interviews to pour over.
11/24/2009