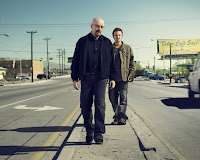 Deadline's Nellie Andreeva is reporting that AMC and Sony Pictures Television have reached a deal to order a fourth season of drama series Breaking Bad, which would air on the cabler next year. A formal announcement from the network is expected to come later today and the deal was reached after both sides were able to compromise on the production budget after there was an impasse over $.2 million. (Deadline)

Ricky Gervais has signed on to appear on the next season of HBO comedy Curb Your Enthusiasm, in which he'll play himself in the eighth episode of the season. No other details were immediately available. Production is set to get underway later this summer. Elsewhere, HBO would seem to be the frontrunner to become the US home of Gervais and Stephen Merchant's latest BBC comedy pilot, Life's Too Short, which stars Warwick Davis (Harry Potter). (Variety)

It's official! Entertainment Weekly's Michael Ausiello is reporting that Maura Tierney (Rescue Me) has officially signed on to topline ABC's upcoming legal drama The Whole Truth, replacing lead Joely Richardson, who bowed out of the project last month. Tierney will play Kathryn Peale, "a deputy bureau chief in the Manhattan District Attorney's office," opposite Rob Morrow, who plays her criminal attorney counterpart, Jimmy Brogan. Move marks the first series regular gig for Tierney since she was forced to drop out of NBC's Parenthood to focus on her medical treatment for breast cancer. (Entertainment Weekly's Ausiello Files)

Gabrielle Union (FlashForward) has been cast opposite Brigid Brannagh in Lifetime's untitled Army Wives spinoff pilot, which will air as an episode of the series. Union will play Detective Gina Holt, an Atlanta cop who is paired with Brannagh's Pamela as her new partner. The untitled new series will be written by Bruce Zimmerman and T.D. Mitchell. (Hollywood Reporter)

Deadline's Nellie Andreeva is reporting that five actors are said to be in talks to join the cast of HBO's Broadway-set John Logan/Kathryn Bigelow drama pilot Miraculous Year, including Norbert Leo Butz, Hope Davis, Frank Langella, Eddie Redmayne, and Patti LuPone. [Editor: interestingly, the fact that Davis--who will next be seen on HBO in Mildred Pierce--is in talks jibes with what she and I discussed when I sat down with her last month as she told me her agents were discussing an ongoing series with HBO.] Butz would play "self-destructive" Broadway composer/lyricist Terry; Langella would play his artist father Alex; Davis would play Terry's laywer sister Mandy; Redmayne would play a singer/dancer in Terry's new production; and LuPone would play a Great White Way diva. (Deadline)

Stephen Collins (7th Heaven) has been promoted to series regular on ABC's superhero drama No Ordinary Family. Collins plays the boss of Julie Benz's character, a research scientist. He appeared in the pilot of the ABC Studios-produced project, which revolves around a family given extraordinary abilities after their plane crashes into a remote section of the Amazon. (Hollywood Reporter)

HBO has optioned the rights to Mara Altman's nonfiction book "Thank You for Coming: One Woman's Quest for an Orgasm," and will develop as an ongoing series for the pay cabler, with Mark Steven Johnson (Grumpy Old Men) attached to write and Howard Deutsch (Pretty in Pink) to direct. (Deadline)

NBC has signed a one-year development deal with director Marc Buckland (Love Bites), under which he will remain aboard the romance anthology as an executive producer and write a pilot script for Universal Media Studios, as well as "take part in the development of pilots that he might direct." "Everything he touches he elevates to the next level," NBC Entertainment/Universal Media Studios primetime president Angela Bromstad told Variety. "Marc is a highly sought-after director/producer and we feel so lucky to have him." (Variety)

TLC has renewed reality series Little People, Big World for a sixth season, which is set to launch on the cabler on September 6th. (Variety)

Syfy has renewed Ghost Hunters for a seventh season, which will launch on the cabler next year. (Hollywood Reporter)

Shelby said…
I can't wait for the next Ricky Gervais show and I'm looking forward to seeing him on Curb too!
6/14/2010

Rebecca said…
Two dudes are assigned to write and direct One Woman's Quest for an Orgasm?
Come on, HBO.
6/14/2010