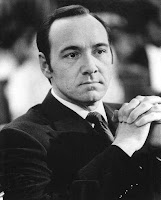 Vulture's Josef Adalian is reporting that Kevin Spacey is in attached to star in Rod Lurie's drama pilot The Crux, about a charismatic cult leader, which is currently being pitched to various networks. (Should the project go forward, Spacey would executive produce with Lurie, Dana Brunetti, and Marc Frydman.) While Adalian reports that talks have begun between Spacey's camp and Showtime (as well as possibly HBO), Deadline's Nellie Adreeva adds that the project is currently being pitched to Showtime, HBO, FX, and Starz, with all four said to be in the running to land the much buzzed project from Lurie (Commander In Chief), who will write the script. Timing, however, may be a key factor. "One stumbling block could be Spacey's schedule," writes Adalian. "In addition to various film roles, a big chunk of Spacey's day planner is filled fulfilling (and tweeting about) his obligations as artistic director for London's Old Vic Theatre." (Vulture, Deadline)

Deadline's Nellie Andreeva is reporting that HBO has given an order to telepic Hemingway & Gellhorn, which will star Clive Owen and Nicole Kidman as literary couple Ernest Hemingway and Martha Gellhorn. Project, executive produced by James Gandolfini (along with Alex Ryan, Barbara Turner, Philip Kaufman, and Peter Kaufman), will be written by Barbara Turner and Jerry Stahl and directed by Philip Kaufman. Production on the telepic, which will follow the romance between Hemingway and Gellhorn as they meet in 1936 and later wed before traveling to report on the Spanish Civil War, is expected to get underway next year. (Deadline)

Ricky Gervais has offered some new details about his new BBC One pilot (co-created with Stephen Merchant) Life's Too Short, which will--hopefully!--be headed Stateside and appear on HBO. “It’s the funniest thing we’ve done,” Gervais said at the Banff World Television Festival of the series, which will star Warwick Davis as a show business dwarf and is based around many of the actor's own real-life experiences, although they transformed Warwick into a manipulative and seething character. "He runs this company called Dwarves For Hire but he’s stealing all the other dwarves’ jobs,” said Gervais. (The Globe & Mail)

SPOILER! TVGuide.com's Natalie Abrams talks to True Blood's James Frain about his upcoming turn as vampire Franklin Mott on the HBO drama series. "Franklin Mott is a private eye," said Frain. "We learn later in the season that he works for Russell [Denis O'Hare], who is the King. He's been sent on a mission to dig up information on Bill. His attention is completely distracted by the charms of Tara [Rutina Wesley]." (TVGuide.com)

Bravo's The Real Housewives of D.C. will launch on August 5th... and will include notorious White House gate-crashers Michaele and Tareq Salahi among the cast. Bravo's Andy Cohen, meanwhile, defended the inclusion of the Sahalis in a post at The Huffington Post. "It is the job of the legal system to decide if and how the Salahis may have broken the law," wrote Cohen. "But our decision to include them in the series speaks to a very basic programming mandate, which is to present real people as they exist within their universe. Meaning, we do not editorialize on their actions, how they raise their kids, live their lives, spend their money or treat their friends. We show them as they are, with awareness but without judgment. We let them be themselves, and let the audience draw their own conclusions, and -- like with real relationships -- sometimes the way people feel about a Housewife changes throughout the season. Whatever the feeling, we leave it to the viewer to decide." (Los Angeles Times, Huffington Post)

Randall Einhorn (The Office) will direct his first pilot, FX comedy Wilfred, which is based on the Aussie comedy of the same name. (Deadline)

SPOILER! TV Guide Magazine's Will Keck is reporting that HBO's Curb Your Enthusiasm will head to New York City for roughly half of its upcoming eighth season. Keck goes on to recount some of the colorful characters that Larry will be encountering over the course of his Manhattan-based misadventures. (TV Guide Magazine)

FOX has ordered a pilot for game show The Money Drop, based on British format The Million Pound Drop. Project, from Endemol USA, will revolve around a group of contestants who are "given a wad of cash and then asked a series of multiple-choice trivia questions. They then place their bets on a trap door that represents their choice. If their answer turns out to be wrong, the trap door opens -- and their money is gone. Contestants keep playing until all their money has fallen down the "drop." Contestants play through eight questions -- and get to keep whatever's left of their cash if they answer that final question right." No executive producer or host has been named; production is slated to get underway in August. (Variety)

Lawrence O'Donnell is set to host his own primetime weeknight show on MSNBC. The analyst and former West Wing writer had subbed in for Chris Matthews, Keith Olbermann,, and Rachel Maddow in the past. No launch date was announced for his upcoming series. (Hollywood Reporter)

More details on the cast changes afoot at CBS' Criminal Minds. Deadline's Nellie Andreeva, who broke the story, is now reporting that the network made the decision to axe several female cast members because of creative, rather than financial, reasons, as an effort to "refresh a veteran drama." A new female series regular will be brought on the crime procedural. (Deadline)

Deadline's Nellie Andreeva is reporting that John Miller, the 28-year NBC marketing veteran, will step down from his post as chief marketing officer for NBC Universal Television Group at the end of the year. (Deadline)

The Hollywood Reporter's James Hibberd has an interview with Tony Robbins about his upcoming NBC primetime series, Breakthrough with Tony Robbins, which is set to launch on the Peacock on July 27th. "The reason I wanted to do something was all hell was breaking loose in the world, there was such enormous levels of stress. And when you go to reality shows, the majority of them are about humiliation," said Robbins. "I thought people need inspiration, but not fake inspiration. Watching real people in extremely stressful real life experiences and watching them over a period of time, 30 days, really transforming their life." (Hollywood Reporter's The Live Feed)

Meredith Ahr has been promoted to SVP of alternative programming and development at NBC/Universal Media Studios. She will report to Paul Telegdy. (Variety)

Anonymous said…
Thanks for all of this! Larry David in NYC! I wish I liked Nicole Kidman.