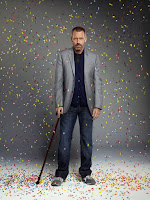 Hugh Laurie's contract on FOX's medical drama House will expire at the end of next season, according to Entertainment Weekly's Michael Ausiello, who talks to Laurie about the crossroads coming up. He claims that he's "open" to working past Season Seven but also feels that there's an ideal time to end a series and he hopes that moment becomes clear ahead of time. "I only hope we’ll know when the time is right [to close up shop]," said Laurie. "When people blunder on for five years after [they should have called it quits]… it gets taken out of your hands. Someone will say, 'That’s it.' But for now, I’m immensely proud of the things we did this season." (Entertainment Weekly's Ausiello Files)

Loads of casting on HBO's upcoming comedy pilot Tilda, which may or may not be based on the life of infamous Hollywood blogger Nikki Finke. (Ahem.) Jason Patric (The Losers) has been added to the cast, where he will play Andrew Brown, the nemesis of Diane Keaton's titular character, who is described by Deadline's Nellie Andreeva as "the mastermind behind the media empire RMG, which Tilda is trying to expose the inner workings of." Also joining Keaton, Patric, and Ellen Page in the comedy pilot, a trio of actors: Wes Bentley (Ghost Rider), David Harbour (Royal Pains), and Leland Orser (24). (Deadline)

Entertainment Weekly's Michael Ausiello is reporting that Diane Farr (Rescue Me, Desperate Housewives) will guest star in an upcoming episode of USA's White Collar, which returns in July for its second season. Farr will play Gina De Stefano, described as "a waitress Mozzie (Willie Garson) has a crush on. She drops a hint early in the episode that she’s in trouble and needs his help." [Editor: I'd love it if Farr could stick around White Collar for more than just one episode, personally.] (Entertainment Weekly's Ausiello Files)

E! Online's Megan Masters takes a look at the season finale of the CW's 90210 and why it didn't feature the "juicy" twists that the series' stars had promised it would deliver, including the identity of who hit the homeless man at the end of Season One. "But come finale night, the only thing remotely left fieldish was the complete exclusion of said reveal. How do you explain that one, CW?!" writes Masters. "According to our reliable 90210 source, some story changes were made post-production (and post-press tour in Trevor's case), and the rumored "real" killer twist was canned. In the end, Annie made peace with her crime, largely due to an encouraging chat with Liam (Matt Lanter), and solemnly wandered home to confess everything to the 'rents. And that's it. If you're hoping to see more of Annie's hit-and-run issues in season three, don't. The Powers that Be are leaving the story as is from here on out: Annie was in fact the drunk driving guilty party." (E! Online's Watch with Kristin)

Entertainment Weekly's Michael Ausiello is reporting that Jason Priestley (90210) has been cast in a multiple-episode story arc on ABC's upcoming summer drama series Scoundrels, where he will play "a prolific TV personality who is immediately smitten with Leven Rambin’s aspiring actress character, Heather," according to Ausiello. (Entertainment Weekly's Ausiello Files)

E! Online's Megan Masters talks to Life Unexpected stars Shiri Appleby, Kris Polaha, and Kerr Smith about what's coming up on Season Two of the CW drama. "Cate and Ryan are now married, and there are going to be some obstacles they're going to have to work through," Appleby tells Masters. "And Cate's job might be up in the air at some point... All I will say is that it's very common knowledge that the first year of marriage is very difficult. We are going to put that to the test. Just because she married him doesn't mean she doesn't still have feelings for Baze." (E! Online's Watch with Kristin)

ABC single-camera comedy pilot How to Be a Better American will get a second shot at placement on the schedule as it has received an order for a new pilot, with major recasting expected on the ABC Studios-produced project. (Deadline)

Entertainment Weekly's Michael Ausiello is reporting that Liz Vassey will not be appearing on CBS' CSI next season after the network opted not to renew her contract for another year. "The show is going in a different creative direction in its 11th season," an unnamed source told Ausiello. (Entertainment Weekly's Ausiello Files)

NBC has finally scheduled its reality series Breakthrough with Tony Robbins, slating the premiere for July 27th at 8 pm ET/PT. The series, which features self-help guru Robbins, is described as an "inspirational, hour-long series starring Robbins and his team of experts who will help participants and their families overcome complex challenges and personal obstacles, and turn their lives around." Project is executive produced by Robbins, Howard T. Owens, Mark Koops, Shauna Minoprio, and Tom Forman. (via press release)

A&E has moved the premiere of its upcoming drama series The Glades from July 13th to July 11th at 10 pm ET/PT in order to avoid direct competition with TNT's Tuesday night drama Memphis Beat. (Deadline)

Warner Bros. Television has promoted Clancy Collins White to SVP of drama development, while Stephanie Groves will now serve as SVP of current programming. Meanwhile, Lisa Roos was promoted to VP of drama development, Adrienne Turner as VP of comedy development, Odetta Watkins promoted to VP of current programming, and Matthew King has been hired as VP of drama. "We have tremendous strength throughout the executive ranks at our company, and I am pleased to announce these very deserving new appointments and promotions which reward the dedication and accomplishments of this outstanding team," said Peter Roth, president of Warner Bros. Television. (Variety, Hollywood Reporter)

Elsewhere, Bob Tuschman has been promoted to general manager of Food Network. (Variety)

cory said…
I really hope "House" ends after this season. Seven seasons is a really great run for any show, especially in one in which the lead character gets more unlikable each season.
6/02/2010