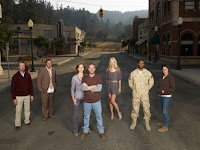 There's a term in mystery writing called a "locked room mystery." You know the sort, a crime--typically a murder--is discovered in which the deed occurred behind a locked door. Unless the killer is still in the room, there is seemingly no means of egress from this chamber, resulting in a baffling and impossible situation.

NBC's new summertime mystery-drama series Persons Unknown, from executive producers Chrisopher McQuarrie (The Usual Suspects), Heather McQuarrie, and Remi Aubuchon, aims to be the television version of such a locked room mystery, revolving not around a singular crime but rather a central mystery: how did a group of seven strangers find themselves taken from their ordinary lives and deposited into a seemingly deserted town? And why is it impossible to leave this place?

The premise alone warrants comparisons both to Lost and to the seminal 1960s British television series The Prisoner, with its use of inescapable and remote scenery, head-scratching laws of reality/society, and the sort of disorientation experienced by the characters.

However, the comparisons end there, really. Despite the presence of creator McQuarrie, Persons Unknown isn't as groundbreaking or memorable as either series. Nor is it as clever.

Part of that, I would suspect, would come to the production model itself. Produced by Fox Television Studios as an international co-production, Persons Unknown feels a bit like a hodgepodge of elements, a shadow version of a first-run broadcast program. The writing seems a bit stilted and weak (a surprise given McQuarrie's involvement), and the performances flabby as well. (The one stand out is the always fantastic Alan Ruck, here a full head and shoulders above the rest of the cast.)

It's hard to become invested in the first hour due to these elements, despite some of the mind-bending elements contained within the series, including an unseen organization that is monitoring the kidnap victims via a series of ominous and ubiquitous video cameras that are set up all over the town (itself a sort of anachronistic place that has the local hotel at the epicenter), a Chinese restaurant that functions as the main dining establishment (just don't ask any questions), suspiciously accurate fortune cookies, and implanted devices that can sedate the victim if they get, well, antsy.

Like Lost, the series attempts to mine the characters' backstories as well. Just why was single mom Janet (Daisy Betts) plucked from her life (leaving behind a scared little girl on a public playground)? Just who is the enigmatic Joe (Jason Wiles) and what was he before he arrived in this place? What connects these individuals? The rest of the characters are made up of paper-thin archetypes--spoiled party girl, gruff solider, angry man, crazy woman--that we've seen done many times before.

Meanwhile, the producers hope to eat their cake and have too by introducing a haggard journalist named Renbe (Gerald Kyd), who is investigating Janet's disappearance and who will likely begin to uncover the truth behind the town and the people running it... that is, unless he ends up there himself. The effect is a clear attempt to offer the best of both words: the high-stakes mystery of this inexplicable town and the outside world, where other events are unfolding. The problem is that they often seem like they're occurring two different series altogether, neither of which is particularly engaging.

Ultimately, Persons Unknown manages to successfully create an aura of doom and mystery, but there's precious little else going for it as NBC burns off its thirteen episodes this summer. While there's perhaps hope for some sort of narrative resolution as a result, I'm not sure too many viewers--known or unknown--will be sticking around that long.

The CineManiac said…
Its disappointing to hear that this series isn't as good as the idea behind it. But, I can't say it's very surprising, seeing as how NBC is dumping it in the summer.
But, I'll probably still give it a couple of episodes before I dump it.
6/07/2010

Cynthia said…
I talked to Jonathan Frakes a year or so ago and he told me he'd gone down to Mexico to work on this. It's been in the pipeline for some time now and that doesn't bode well, does it.
6/07/2010

Unknown said…
I thought this was a mini-series; I hadn't understood it was an already-killed series. That puts a different spin on things. What's the point of watching it at all? I stopped watching Defying Gravity and FlashForward as soon as I knew they were to be canceled.
6/07/2010