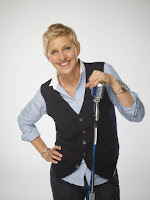 Welcome to your Friday morning television briefing. First up: the swirling rumors, news, and confirmations emanating from FOX about the changes at American Idol...

The big news from last night of course is the departure of Ellen DeGeneres from FOX's American Idol after just one season. DeGeneres released a statement yesterday evening that confirmed her departure from the musical competition series. "A couple months ago, I let FOX and the American Idol producers know that this didn't feel like the right fit for me," said DeGeneres via a network press release. "I told them I wouldn't leave them in a bind and that I would hold off on doing anything until they were able to figure out where they wanted to take the panel next. It was a difficult decision to make, but my work schedule became more than I bargained for. I also realized this season that while I love discovering, supporting and nurturing young talent, it was hard for me to judge people and sometimes hurt their feelings. I loved the experience working on Idol and I am very grateful for the year I had. I am a huge fan of the show and will continue to be." DeGeneres' departure comes at a time where there is a huge amount of upheaval at the series, which is set to launch its tenth season this winter, between the departures of Paula Abdul and Simon Cowell, Randy Jackson remains the only original judge still standing on Idol. (via press release)

FOX has declined comment on the potential replacement for Ellen: Jennifer Lopez. According to Variety's Michael Schneider, insiders close to the situation maintain that there is no deal in place to bring Lopez on board as a judge on American Idol and there are certain sticking points that might make a deal untenable. "The singer -- whose career has been on the skids for quite some time -- emerged as a true contender for the gig in recent weeks," writes Schneider. "While other names have been bandied about -- from Justin Timberlake and Jessica Simpson to Elton John and Sean "P.Diddy" Combs -- Lopez might make more sense. The singer is known for being brash -- witness her 'Jenny from the Block' persona -- and has the obvious industry background." As for why DeGeneres chose to decamp, The Hollywood Reporter's James Hibberd cites an anonymous source: "A source in the DeGeneres camp said she was prepared to meet the terms of her multiyear contract but told friends that her comedy wasn't effective on the show and that Fox president of alternative entertainment Mike Darnell had told her privately that he blamed her chemistry with fellow judges Randy Jackson and Kara DioGuardi." (Variety, Hollywood Reporter)

As for Lopez, Deadline's Nikki Finke and Nellie Andreeva are reporting that it's already a done deal. "We hear her manager Benny Medina (whom she once fired) orchestrated the meeting with the American Idol producers a month ago, and negotiations have been ongoing ever since," write the Deadline duo. "We've learned a deal was closed earlier this week under the utmost secrecy." Move comes as Nigel Lythgoe returns to Idol as executive producer. (Deadline)

TMZ, meanwhile, is reporting that fellow Idol host Kara DioGuardi has been fired from her position as judge on the FOX competition series and reports that American Idol will return to a three-judge format next season. As for those judges, the online gossip site claims that they will be Randy Jackson, Jennifer Lopez, and Steven Tyler. (TMZ)

The Chicago Tribune's Maureen Ryan is reporting that Charles Dance (Bleak House) has been cast in HBO's upcoming George R.R. Martin drama series Game of Thrones, where he will play Tywin, described as "a wealthy lord and head of one of the most powerful clans in the realm." He is the father of Cersei (Lena Headey), Jaime (Nikolaj Coster-Waldau), and Tyrion (Peter Dinklage). [Editor: Based on his presence and gravitas alone, I think Dance is absolutely perfect for this role.] (Chicago Tribune's The Watcher)

Deadline's Nellie Andreeva is reporting that HBO has teamed up with Party Down's Lizzy Caplan and producers Will Ferrell and Adam McKay to adapt Julie Klauser's memoir, "I Don't Care About Your Band," into a comedy series that will serve as a star vehicle for Caplan. "The book, a gritty but comedic look at what it’s like to navigate the dating world in your 20s," writes Andreeva, "chronicles Klausner’s experiences from her preadolescent sexual awakenings through the unsavory details of sleeping with a gallery of losers throughout her 20s." [Editor: while I'm crushed that Party Down won't be continuing, I am chuffed that Caplan will be back on my television and on premium cable, to boot. Move marks a reunion of sorts between Caplan and HBO, where she recurred on the first season of vampire drama True Blood.] (Deadline)

E! Online's Kristin Dos Santos and Megan Masters have a comprehensive report from yesterday's TCA session for the CW's Gossip Girl, where producers teased the return of Georgina Sparks, haute couture in Paris, Jenny, and much more. (E! Online's Watch with Kristin)

NBC is said to be planning screening events for its upcoming thriller The Event in five cities across the country, to be determined by a popular vote, according to The Hollywood Reporter's James Hibberd. "The network is partnering with Eventful Inc. and its Demand It platform to let viewers lobby for their city to receive a screening," writes Hibberd. "The five cities with the most votes will win a pre-premiere screening." (Hollywood Reporter)

Law & Order: Los Angeles has scored another player. Corey Stoll (Salt) has joined the cast of the Dick Wolf procedural drama, according to Deadline's Nellie Andreeva, where he will play TK Jaruszalski, the partner to Detective Rex Winters (Skeet Ulrich), who is described as "a confident Hollywood native with a cynical view of the entertainment industry [and] a health nut with an active social life." (Deadline)

Entertainment Weekly's Michael Ausiello is reporting that Clayne Crawford (24) has landed a role on Alan Ball's HBO drama pilot All Signs of Death, based on a Charlie Huston novel. Crawford would play the friend to a crime scene cleaner (Ben Whishaw) who is described as "a sexy greaser who runs a tattoo parlor." (Entertainment Weekly's Ausiello Files)

New developments in the allegations against former ABC Entertainment president Steve McPherson. Deadline's Nikki Finke has obtained a copy of a faxed letter sent to The Hollywood Reporter by McPherson's lawyer Marty Singer, who demands an apology and a retraction after the trade publication published reports that McPherson was the target in a sexual harassment probe before his resignation from the network. (Deadline)