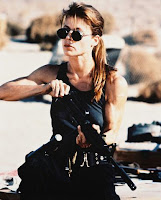 Welcome to your Monday morning television briefing. It's the brief calm between the dual storms of Comic-Con and the TCA Summer Press Tour and there oh so much to do. Let's hit the headlines.

Chuck's executive producers Josh Schwartz and Chris Fedak stunned audiences at San Diego Comic-Con this weekend by announcing that Linda Hamilton (Terminator 2: Judgment Day) would be playing Chuck's mama Mary Bartowski, the oft-mentioned missing mother of the Bartowski siblings who was briefly glimpsed in the season finale. Hamilton will recur throughout Season Four of Chuck, though producers are being cagey about saying just what Mary has been up to since she walked out on her family, though they do admit that espionage runs in the family. "Hamilton will appear throughout the season, leading Chuck to discover that her life was shrouded in secrets," said Warner Bros. Television in an official press release about the casting. "She was a spy, a CIA agent ... and that's just the beginning. Who is she today? One thing is certain: She's not the soccer mom who left her children so many years ago." (via press release)

[In other Chuck news, composer Tim Jones will take over scoring FOX action drama series Human Target for its second season, which launches this fall. Jones will replace Bear McCreary, who will himself move over to AMC's The Walking Dead, while--fret not!--Jones will also continue on Chuck as well.)

In a surprising twist, Alfred Molina has joined the cast of NBC's Law & Order: Los Angeles, where he will play a deputy district attorney on the latest incarnation of the long-running procedural, set in the City of Angels this time around. Molina is the second actor to join the production and will star alongside Skeet Ulrich in the Universal Media Studios-produced series, which launches September 22nd. (Hollywood Reporter)

Felicia Day (Dollhouse) has signed on to appear in ten episodes of Eureka, while Caprica's Polly Walker will appear on two episodes of Syfy's Sanctuary, where she will play Ranna, described as "a powerful foe who faces Helen Magnus (Amanda Tapping) after the team encounters her in the show's mid-season cliffhanger." No details of just who or what Day will be playing on Eureka were immediately available and the network seems to be keeping the lid on such details for now. [Editor: could it be that they're saving something for TCA? Hmm...] (Hollywood Reporter)

USA has ordered a telepic for its action series Burn Notice that will serve as a prequel focusing on Sam Axe (Bruce Campbell) in his final assignment as a Navy SEAL. No writer or director have been announced for the project, which will be shot between the fourth and fifth seasons of Burn Notice, nor were any other actors announced for the two-hour film. (Variety)

Deadline's Nellie Andreeva is reporting that Melora Hardin (The Office) has signed on to recur on NBC's legal drama Outlaw, where she will play Claire Sax, described as "a powerful senior partner in an elite law firm and love interest to Garza." She replaces Gina Gershon, who played the role in the original pilot. Hardin has also signed on to appear in a multiple-episode story arc on The Office, where she will turn up once again as Jan Levinson for Steve Carell's potentially final season on the comedy series. (Deadline)

Elsewhere, Andreeva is also reporting that British actor Ben Whishaw (Brideshead Revisited) has been cast as the lead of Alan Ball's new HBO drama pilot All Signs of Death, based on Charlie Huston's novel "The Mystic Arts of Erasing All Signs of Death." Whishaw will play Webster Filmore Goodhue, described as "an inveterate twenty-something slacker who stumbles into a career as a crime scene cleaner, only to find himself entangled with a murder mystery, a femme fatale and the loose ends of his own past." (Deadline)

E! Online has a full recap of yesterday's Glee panel at San Diego Comic-Con, including news that the series will feature a Rocky Horror Picture Show-inspired episode this season, there will be new love triangles (including an Artie-Tina-Mike Chang one), the Britney Spears episode will air in September, Idina Menzel will return, and more. (E! Online's Watch with Kristin)

Jonathan Sadowski (Terminator: The Sarah Connor Chronicles) will replace Ryan Devlin on CBS' $#*! My Dad Says and will star opposite William Shatner in the Warner Bros. Television-produced comedy series. (Variety)

Sarah Carter (Dirty Sexy Money) has joined the cast of TNT's upcoming alien invasion drama Falling Skies, according to Deadline's Nellie Andreeva. Carter will star opposite Noah Wylie and Moon Bloodgood, and will play a member of a motorcycle gang who helps the heroes escape the aliens. (Deadline)

The Futon Critic is reporting that Stargate Universe and Sanctuary will move to Tuesday nights beginning in September. Both series will return with new seasons on September 28th. (Futon Critic)

The New York Times' Sarah Lyall has a great feature on Showtime/BBC's new comedy series Episodes, which stars Matt LeBlanc, Tamsin Greig, and Stephen Mangan. "It takes the whole Joey persona that I have and meets it head-on," LeBlanc told Lyall. "It’s really liberating. When you get pigeonholed as one character, people tend to think, 'That’s all he can do.' [...] The Matt LeBlanc in the show uses the fact that people assume I’m dumb because I played the dumb guy on Friends — he uses that to manipulate situations to his advantage. He manipulates the writers so that the show is more the way he wants it to be. Not that he’s right, but it exposes his insecurities about his ability." (New York Times)

Producer Francie Calfo will succeed David Nevins as the president of Imagine Television. (Nevins has left to take over as entertainment president of pay cabler Showtime.) Calfo will report to Brian Grazer and will step into the role within the next fortnight. (Hollywood Reporter)

Top Ten said…
Alfred Molina is everywhere these days. He's also in a new BBC sitcom with Dawn French called Roger and Val Have Just Got In
8/16/2010