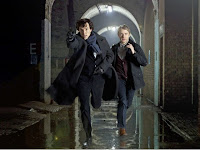 "My name is Sherlock Holmes and the address is 221b Baker Street..."

The details might be the same but this is most definitely not your great-grandfather's Sherlock Holmes. Sir Arthur Conan Doyle's detective is given a modern-day makeover courtesy of Steven Moffat and Mark Gatiss with the new Sherlock, which launches on Sunday in the UK on BBC One and Stateside at the end of October on PBS as part of Masterpiece Mystery.

Starring Benedict Cumberbatch (The Last Enemy), Martin Freeman (The Office), and Rupert Graves (Death at a Funeral), Sherlock deposits the titular master sleuth and his trusted companion Dr. John Watson to contemporary London, where they will use their deductive skills to solve all manner of bizarre, surprising, and just plain weird cases.

"Conan Doyle's stories were never about frock coats and gas light," said Moffat. "They're about brilliant detection, dreadful villains and blood-curdling crimes... and, frankly, to hell with the crinoline. Other detectives have cases, Sherlock Holmes has adventures, and that's what matters."

The full trailer for Sherlock can be viewed below, as well as an interview with Doctor Who head writer/executive producer Steven Moffat and Mark Gatiss about the new series.

nel said…
thanks for posting the trailer; the only one i saw on-line previously was UK only. i'm looking forward to this so much more than new Who from Moffatt. doubt i'll be able to wait until Oct. to see, sorry PBS!

would have loved to see Tennant in this but too similar a character to the Dr. and too soon after Who.
7/20/2010

Tempest said…
I must admit to being in the Jeremy-Brett-is-Sherlock-Holmes school of thought. As far as the original Conan Doyle stories, nobody can beat Brett. This, however, feels like a clever new way to approach the characters. Can't wait to see it.
7/20/2010

Summer said…
It was great to see the trailer. I knew there was a reimagining of Sherlock Holmes coming up on Masterpiece Mystery on PBS, and now am very excited about the new installments!
7/20/2010

AskRachel said…
I agree with "nel" that Tennant would be perfect in this role but Benedict Cumberbatch is a solid actor (and I love Martin Freeman and Rupert Graves) so it should be a fun ride...especially in the capable hands of Steven Moffat.
7/20/2010