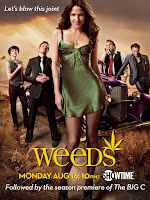 The Botwins are hitting the road.

Season Six of Weeds begins next month and Showtime has issued a striking poster image for the sixth season, one that depicts Nancy, Silas, and Shane Botwin (along with Justin Kirk's Andy and Kevin Nealon's Doug) as yesteryear hoods, a la Atlantic City. (Nice touch with Shane holding onto that plot-twist-driven croquet mallet.)

A larger version of the poster can be found after the jump, along with the teaser trailer for Season Six of Weeds, just in case you missed it a few weeks back. 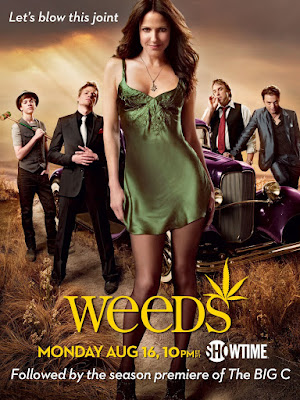 Season Six of Weeds kicks off on August 16th at 10 pm ET/PT on Showtime.

Watch Veronica Mars said…
Good post and i will watch this online thanks for the information.
7/30/2010

Watch Weeds Online said…
I am expecting this to be one of the best seasons of the show, got to love how the family sticks together even when things go bad for them.