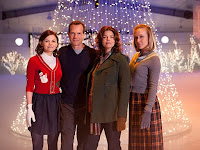 Over at The Daily Beast, you can read my latest feature, "Falling in Love with Big Love Again," in which I examine why HBO's polygamist family drama Big Love is back in fine form for its fifth and final season.

In addition to taking a critical look at the start of the fifth season, I also make some predictions about where the season--and the series as a whole--is ending.

I'm curious to know: are you planning on watching Season Five of Big Love? What was your take on last season? And how do you think creators Mark V. Olsen and Will Scheffer are going to end the series? Head to the comments section to discuss.