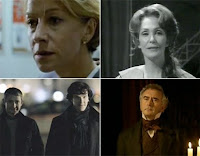 Over at The Daily Beast, in my latest feature ("Masterpiece, Icon of PBS, Turns 40 Today"), I talk with Masterpiece executive producer Rebecca Eaton, who has been in the top job since 1985, about the 40th anniversary, the 2008 rebrand, and looking toward the future of this franchise.

I also pick 12 of the best shows from the last four decades of Masterpiece, no small feat given the thousands of hours produced, co-produced, and acquired by the PBS series.

(I could easily pick 50 of my favorites, so, yes, there are quite a few worthy ones that didn't get selected.)

Elizabeth Kerri Mahon said…
There are just too many! I Claudius of course but also Danger UXB, Poldark, Lillie, Anna Karenina (both versions) and Brideshead Revisited are amongst the many. I hope that they update the 30th anniversary book for the 40th.
1/10/2011