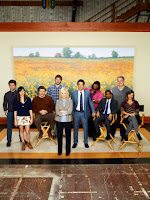 The moment many have been waiting for is finally here.

The Paley Center for Media has this morning unveiled its full lineup for the 2011 Paley Festival, taking place March 4-17 at the Saban Theatre in Beverly Hills, CA. (The annual festival moved to its new digs last year.)

Among the offerings for the 2011 festival, which is always standing room only: Community, Parks and Recreation, True Blood, White Collar, The Walking Dead, American Idol, Supernatural, Eastbound and Down, Raising Hope, a Freaks & Geeks/Undeclared Reunion, an evening with Jimmy Fallon, and more.

Tickets will go on sale to members on January 21st and to the general public on January 23rd at 9 am PT via Ticketweb.

The complete Paley Festival 2011 lineup, with event dates, can be found below:

Now that the full schedule has been announced, I'm curious to know: which of the above panels are you the most excited to see? What are you dying to get tickets for? And are you planning on coming out to Los Angeles for the event? Talk back here.

snapthejap said…
I'd LOVE to get tix for: Parks & rec, Supernatural, and Community. Looks like the MUST event would be the Freaks & Geeks/Undeclared reunion. Eastbound & Down/True Blood/Walking Dead would be my tertiary choices.

Debbie said…
I would go to the Evening with Jimmy Fallon and Community!
1/20/2011