"My Back Just Walked into Your Knife": The Winner of "Top Chef" Is a Cut Above 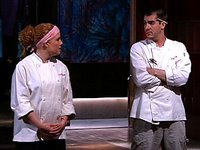 In life, there are quite a few culinary metaphors that could seem to apply to the season finale of Bravo's first installment of Top Chef. That's the way the cookie crumbles, you can't cry over spilt milk, etc. And then there's my personal favorite: if you can't stand the heat, get out of the kitchen.

While Top Chef's Tiffani didn't exactly succumb to the heat or pressure of the competition's kitchen, she was done in by her own abrasive personality and an overly ambitious menu that failed to coalesce into a singular vision. Tiffani and Harold's brief was to come up with a five-course meal for eight diners; each course would have to be paired with a specific wine from guest judge Lorraine Bracco's label. But they wouldn't be cooking alone. Producers brought back Lee Anne, Dave, Miguel, and Steven to assist in the kitchens of Craftsteak and Nob Hill at the MGM Grand Resort in Las Vegas. Despite the fact that all four returning chefs wanted to work for Harold (zing), Tiffani gets saddled with Dave and Steven. (Harold gets Lee Anne and when forced to choose between Miguel and Dave, he wisely has them draw knives for it and ends up with Miguel.)

Harold sits down with his team and tastes each and every wine and, as they do, they collectively come up with a simple yet elegant menu that not only pairs well with each of the wines but also showcases the talents and abilities of his teammates and co-workers. Meanwhile, Tiffani seems to have already concocted a menu in her mind before the challenge even began and doesn't bother to taste the wines, shoving off the responsibility for the pairings on sommelier Steven, who advises her against trying to pair a wine with an artichoke dish, a Herculean task. She doesn't listen. Instead, Tiffani devises a complicated and complex menu of dual preparations for each course... which means that instead of cooking five dishes, Tiffani is preparing ten dishes, an enormous risk, which--if she can pull it off--could really wow the judges.

Tiffani and Harold couldn't be more different. His modesty and unassuming nature clash strongly with her coldness and self-absorption (i.e., constantly interrupting people when they're speaking, trying to steal the limelight away from Dave during the reunion's T-shirt incident, etc.). While Harold hand-writes the menu and wisely stays away from the judges table during the service (he appears at the beginning to meet everyone and at the end for criticism), Tiffani talks nonstop with each course, cuts off the hosts when they attempt to introduce the guest judges, goes on a wild tangent about the duality of the preparations reflecting her own duality (Bracco asks if she needs to "put her Dr. Melfi suit on") and blabs on endlessly, letting the dishes grow cold. While Tiffani's food is good, the judges are clearly not taken with her. And her best course seems to be the dessert, which was created and prepared by Dave. On his own. A fact that Tiffani tries to cover up by taking credit herself. Fortunately, the judges are not so foolish as to believe her.

Harold's menu took less risks but the dishes were amazing and satisfying, not to mention beautifully prepared; the wine pairings were balanced and the judges seemed happy with his answers (especially Drew Nieporent who asked Harold who he cooked for: himself or his guests. Harold answered both, while Tiffani said herself, surprise).

After the two meals are completed, the judges ask Lee Anne, Steven, Miguel, and Dave who they think the top chef should be. And none of them hesitate before saying, "Harold." I'd almost feel bad for Tiffani as both Dave and Steve get totally smashed the night before the competition and show up hungover... and continue to drink. But then again, it's rather hard to feel bad for Tiffani, when faced with the fact that all four chefs chose Harold, she tells him, "My back just ran into your knife." Um, harsh? The fact that she says that--and that she would use the money to travel and "pay off [her] debts"--made me really hope that she doesn't walk away as the winner.

But rightfully so, my boy Harold walks away with the $100,000 cash prize, the Food & Wine magazine spread, and the chance to display his skills at the upcoming Aspen Food & Wine Classic, all of which add up to an enormous opportunity for the publicity (and a quick cash infusion) needed to launch one's own restaurant. A goal which Harold says is in the works; he plans to open his own restaurant in Manhattan this fall.

And judging by the quality of his food, the passion he displays, and his inimitable humility, I'll be one of the first to try to get a reservation.

Anonymous said…
Tiffani needed a reality check in the worst way, so it was awesome to see her reaction when she was told that the four sous chefs thougt Harold deserved to win. Harold seemed a bit embarassed, which just shows that not only did he outcook Tiffani, he outclassed her.
5/30/2006