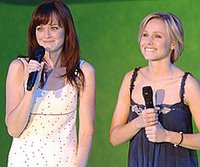 Sniffle. Welcome to the very last day of network upfronts week! It's with a little sadness that that we come to the end of the line as the last of the networks finish making their announcements about their fall schedules today.

No fall schedule has been as scrutinized or been the subject of as much guesswork and conjecture as the CW's. Like a phoenix rising from the ashes of the WB and UPN netlets, the CW has emerged as a blend of the two fallen networks and has had the arduous task of combining two very different lineups into one cohesive package while also adding some new programs into the mix. So, have they succeeded? Find out below...

Returning Series:
WB: Gilmore Girls, Beauty & the Geek, One Tree Hill, Supernatural, Smallville, 7th Heaven, Reba* (despite being cancelled, it's now been renewed)
UPN: Veronica Mars, Everybody Hates Chris, All of Us, Girlfriends

Reactions:
Pretty much expected from the rumors that have been flying over the last few days. (Yay, Veronica!) The CW has more or less taken the strongest elements from the WB and UPN and fused them into the fall schedule on one network. (But One Tree Hill? Seriously? Over Everwood? Bizarre.)

The schedule rather resemebles the current WB schedule, with a few UPN additions. Pairing Gilmore Girls and Veronica Mars on Tuesday nights (their traditional homes) was a no-brainer as the shows seem to complement one another and seem a natural fit. Likewise for 7th Heaven and Runaway, whose family drama genres seem a perfect combination for a family-friendly double feature on Monday evenings.

It makes sense to keep UPN's urban-themed sitcoms together in one block and even pair them with a second window of America's Next Top Model. Not sure Sunday is the best night for that (I think Mondays would have been better, but then you'd lose the real estate traction of 7th heaven), but I think it's a good idea to form a programming block. But Everybody Hates Chris on Sundays at 7 pm?!? That's way too early. Great plan, CW, to eliminate what audience you've built so far. (That's the definition of foolhardy.) I'd rather you flip the ANTM repeats to 7 and shift everything an hour later.

All in all, rather what I anticipated beforehand but I am still on cloud nine that Veronica Mars made the cut that I'll overlook the fact that they only ordered two new series for fall (Runaway and The Game) and that neither of them interests me in the least.

Did I mention how thrilled I am about Veronica Mars?

Anonymous said…
question - is the CW going to broadcast on the UPN station (13) or the WB station (5), or is it going to be different for every market?

Jace Lacob said…
In theory, the CW will be broadcast on the former WB stations across the country (in almost all of the national markets) while the former UPN afils will now be beholden to Rupert's new MyNetworkTV fiasco-to-be. So, here in LA, it will be on Channel 5, the former WB afiliate.
5/18/2006

Unknown said…
re: ONE TREE over EVERWOOD: ONE TREE is cheaper to produce than EVERWOOD and I heard there were also behind the scenes changes at EVERWOOD that might've resulted in its demise. But mostly it was the money - it's always about the benjamins...
5/18/2006