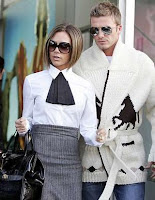 Following a tense bidding war, NBC has signed a deal for an untitled reality series documenting every moment of Victoria "Posh" Beckham's move to Los Angeles with husband, soccer star David Beckham. Reportedly, the ex-Spice Girl has been offered £10 million to do the series.

The series will be executive produced by American Idol's Simon Fuller (who, not so coincidentally, used to represent Posh and the rest of the Spice Girls back in the day) through his 19 Entertainment shingle. NBC is said to want to air the series as early as this summer.

But the question is: Do we really care?

I'm not entirely sure why NBC (desperate though they might be for another ratings hit) would spend this kind of dough on an already super-overexposed celebrity couple that most people don't bat an eyelash over outside of Blighty.

In fact, the only super-couples I'm interested in seeing on NBC next season are The Office's Jim and Pam and Liz Lemon and Jack Donaghy on the still-not-renewed 30 Rock.

Anonymous said…
Explain to me why NBC, being in the position that it's in, and having no excuse -- like the CW -- for it, doesn't take more CREATIVE risks, instead of ONCE AGAIN throwing money at a terrible show and hoping people will be gullible enough to watch it?

There are only so many times you can bang your head against a wall before you have to stop and say to yourself -- hey. Maybe it's MY fault I'm bleeding...

Do people in Omaha know who the hell Posh and Becks are? Do they care?!

If Reilly and Zucker were running any other corporation in America, would they STILL have their jobs?...
2/28/2007

Danielle C.F. Maris said…
Posh and Becks may be the Brangelina of Britain but I'm sure most people here don't know who they are and, more importantly, don't care to find out.
2/28/2007

Anonymous said…
"But the question is: Do we really care?"