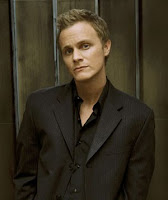 David Anders (Alias, Heroes) has been cast in a recurring role on Day Eight of FOX's 24 and Zap2It's Rick Porter has managed to obtain some further information about Anders' villainous character. Anders, who is slated to appear in a handful of episodes next season, will play Josef Bazhaev, the son of an Eastern European mobster, who is described in casting breakdowns as being the "heir apparent to an Eastern Promises-style godfather. Josef is a dangerous man but is cautious and worries about things more than his father." (Zap2It)

Just a few days after the opening of feature film The Time Traveler's Wife, ABC has announced that it is teaming up with Friends creator Marta Kaufman and Warner Bros. Television to develop a drama series based around the film (itself an adaptation of Audrey Niffenegger's novel). Kaufman will write the pilot script and executive produce. "ABC executives believe the complex plot of the original novel will work well in series form," writes The Wrap's Joe Adalian, "since Kauffman will be able to explore the romantic relationship at the core of the story over the course of several seasons." However, the potential series won't strictly be serialized and will also be comprised of episodic storylines. (The Wrap)

Matt Lauria (Lipstick Jungle) has been cast as a series regular in Season Four of Friday Night Lights, where he will play Luke, described as "a charming yet cocky junior who reluctantly finds himself playing for Coach Taylor’s East Dillon squad," by Entertainment Weekly's Michael Ausiello. Season Four of Friday Night Lights kicks off on October 28th on DirecTV before airing next summer on NBC. (Entertainment Weekly's Ausiello Files)

Canadian viewers desperate to catch Season Three of period drama Mad Men will have to turn to iTunes for their next fix. Lionsgate Television via its affiliate Maple Pictures has made a deal with iTunes Canada to carry Season Three of Mad Men for download in both standard definition and HD. (Hollywood Reporter)

E! Online's Jennifer Godwin has a fantastic interview with Nurse Jackie's Merrit Wever, who plays innocently addled nurse Zoey on the Showtime dramedy series. "I think it would be a huge deal," said Wever when asked what Zoey's reaction would be upon learning about Jackie's darker side. "I could see Zoey staging an intervention, thinking she should take it upon herself to sober Jackie up. I could see her thinking this is why she was sent to the hospital. I think she would get all of the pamphlets and literature she could possibly find on drug addiction, and Zoey would annoy Jackie sober. And I say annoy lovingly. She would care Jackie sober, because she does think she's the best thing since sliced bread. Zoey adores Jackie. She thinks she's a great lady." (E! Online's Watch with Kristin)

Michael B. Jordan (The Wire) has been cast as a series regular in Season Four of Friday Night Lights, where he will play troublemaker Vince, who is described by Entertainment Weekly's Michael Ausiello as "charming at times, the junior running back can be dangerous and menacing—a result of his crime-riddled upbringing. He quickly finds himself at odds with the team’s new pretty boy Luke." (Entertainment Weekly's Ausiello Files)

NBC has given a script order to an untitled multi-camera comedy project from writer/executive producer Gary Janetti (Will & Grace) about two men--one straight, the other gay--who are best friends. Project, from 20th Century Fox Television, "marks the first major deal between NBC and 20th TV since the network's May cancellation of the 20th TV-produced My Name Is Earl after four seasons," writes The Hollywood Reporter's Nellie Andreeva. (Hollywood Reporter)

BBC One have commissioned a 90-minute adaptation of Henry James' supernatural classic The Turn of the Screw. Adapted by Sandy Welch (Jane Eyre) and directed by Tim Fywell (The No.1 Ladies' Detective Agency), the action of the spine-tingling novella is moved to post-WWI. The drama, which begins shooting later this month, will star Michelle Dockery (Cranford), Sue Johnston (Waking the Dead), and Mark Umbers (Mistresses). (BBC)

PBS will launch a new culinary-themed travel series Gourmet's Adventures with Ruth, which will follow Gourmet editor-in-chief and author Ruth Reichl as she travels the world visiting cooking schools with celebrities. The ten-episode series will debut on PBS on October 17th and will also be available via Gourmet's TiVo channel and on American Airlines flights. (Hollywood Reporter)

Former CBS executive Lisa Leingang has been hired as SVP of original programming and development for Comedy Central's East Coast operations. She will report to Lauren Carrao. (Variety)

jen said…
I just finished Time Traveler's Wife and my first thought when I got halfway through was: Huh. This is like "Journeyman" without the saving-people part... Awww, I miss "Journeyman" now.
8/18/2009

susie que said…
I'm happy to see David Anders on a high profile show but wish it was something better than 24 (I am not a fan). He was brilliant as Sark and it would be fun to see him as a super villain on Chuck or even as one of the new Brits on Mad Men or anything more worthy of his talent.
8/18/2009

foodie2d said…
I'm looking forward to Adventures with Ruth. I love Ruth Reichl's writing and hope that she is just as witty and entertaining on camera.
8/18/2009

rockauteur said…
Jen - you beat me to it... I was just about to call out the similarities between the potential television version of 'The Time Traveler's Wife" and "Journeyman." Essentially, the same series, though I'm guessing without the action/conspiracy theory nature of it... I miss Journeyman - it was a series so full of promise that just got better and better as the season rolled on... I just wished NBC allowed the show to wrap up and fully explain what was going on!
8/18/2009