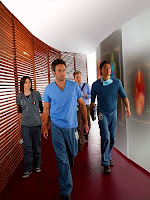 Sorry Alex O'Loughlin fans: CBS has pulled Three Rivers from its schedule, effective immediately. Beginning this Sunday, Cold Case will move to 9 pm ET/PT with the 10 pm timeslot to be filled by a revolving door of drama repeats. According to the Hollywood Reporter's James Hibberd, Three Rivers "is still in production and the network will complete all 13 episodes of the show's initial order." Whether or not CBS will burn off the remaining installments remains to be seen but it's clear that there's no future for the low-rated medical drama. (Hollywood Reporter's The Live Feed)

Could 2012 bring about the end of the world? Or at least the end of Jack Donaghy? Alec Baldwin has revealed his intentions to quit acting when his contract with NBC's 30 Rock expires in 2012 in an interview with Men's Journal. "I don't have any interest in acting anymore," said Baldwin. "I'm not young, but I have time to do something else." [Editor: a 30 Rock sans Baldwin isn't 30 Rock at all, so let's hope that Tina Fey manages to back that truck of money up to Baldwin's door ASAP.] (via E! Online's Watch with Kristin)

Captain Jack Harkness likely won't be appearing in Season Five of Doctor Who, according to John Barrowman... who revealed, however, that Torchwood will be back with a fourth season of thirteen episodes. "I don't know about Captain's Jack future in Doctor Who because nothing has been said or I haven't been asked. I'm kind of prepared that I won't be in any of it, which is fine," Barrowman told Radio 2. "But we are discussing the future of Torchwood because most definitely Torchwood will come back to the BBC, which is fantastic. We're not sure when, because we have to work out the logistics of the filming - and it's already said that it'll be 13 episodes instead of 5." So, some good news then, right? (via Digital Spy)

Two more actors heading to Bon Temps next season: Marshall Allman (Prison Break) has been cast in HBO's True Blood, where he will play Sam Merlotte's younger brother Tommy, and Shannon Lucio (The O.C.)--no stranger to vampires herself, having appeared in the original pilot for CBS's short-lived Moonlight--has joined the cast as Bill's wife Caroline, whom he abandoned after becoming a vampire during the Civil War. (Entertainment Weekly's Ausiello Files)

Pilot casting alert! Heroes' Sendhil Ramamurthy and Jane Curtin (3rd Rock from the Sun) have been cast opposite David Tennant in NBC legal dramedy pilot Rex Is Not Your Lawyer. Ramamurthy will play "an ambitious but good-natured lawyer who was in Rex's shadow until Rex's career switch and whose friendship with Rex becomes complicated when he falls in love with his pal's fiancee (Abigail Spencer)." His participation is said to be in second position to Heroes, but it's thought likely that he'll join the cast full-time should the project go to series. Curtin, meanwhile, will play the mother/mentor of Rex (Tennant), a highly successful lawyer who falls for Rex's therapist (Jeffrey Tambor). (Hollywood Reporter)

The Chicago Tribune's Maureen Ryan has a fantastic interview with Sons of Anarchy creator Kurt Sutter ahead of tonight's second season finale on FX. "The one challenge that FX had with the show [when it was being developed] is that they’d never had a lead character this young," Sutter told Ryan. "They were trying to cast it older initially, and I fought against it. My point was that Jax is a man, but he hasn’t decided what kind of man he is going to be. That’s what the series is about...
Not to compare [Sons] to The Sopranos, but what rooted Tony [Soprano] was always the vulnerability. At the root of it, Tony was just a guy who had immense self-loathing, which always brought him to his knees and always had him questioning. Ultimately I think people tap into [Jax] because of his vulnerability and his questions... Jax makes mistakes." (Chicago Tribune's The Watcher)

TNT has announced that it has canceled legal drama Raising the Bar, which starred Mark-Paul Gosselaar (and his Season One co-star, a terrifying haircut). "Everyone at TNT had a great experience working on Raising the Bar with Steven Bochco and the rest of the show's terrific cast and crew," said a network spokesperson. "We're proud of the series and appreciate the efforts of all of the creative people who were involved. Unfortunately, ratings for Raising the Bar's second season did not reach the levels required for TNT to renew the series." Three unaired episodes remain, with TNT thought likely to burn them off in March, according to E! Online's Jennifer Godwin. (TVGuide.com, E! Online's Watch with Kristin)

ABC is developing an untitled single-camera comedy to star Nicole Ritchie (Chuck), in which she would play "a professional woman with complicated family relationships and struggling to figure out what role she'll take as her life and her family evolve," according to Variety's Michael Schneider. Daisy Gardner (Californication) will write the pilot script under the guidance of executive producer Warren Bell (According to Jim), who will produce alongside Jamie Tarses. (Variety)

Bravo announced that it would launch docusoap Kell on Earth, which follows fashion PR maven Kelly Cutrone, on February 1st at 10 pm ET/PT. Series, executive produced by Magical Elves' Dan Cutforth and Jane Lipsitz, will follow Cutrone as she "balances running her wildly successful fashion PR company, People's Revolution, juggling Fashion Weeks in New York and London, with being a single mother and one of New York's most notable women about town." (via press release)

Elsewhere at the cabler, it's still unclear whether partycrashers Tareq and Michaele Salahi will end up on the channel's upcoming Real Housewives of D.C. after they allegedly crashed a state dinner at which President Obama and other dignitaries were present. "The decision as to who will be included in the series will not be made for several months," a Bravo spokesman told Variety. "We are continuing with the production of the show. However, specifics with respect to the Salahis are yet to be determined." What is clear is that the cameras won't continue to follow the Salahis. "Nothing is scheduled at this time," said the same spokesperson. (Variety)

FOX has ordered thirteen episodes of animated comedy Bob's Burgers, from writer/executive producers Loren Bouchard and Jim Dauterive. Series, from 20th Century Fox Television, revolves around a man who runs a struggling burger restaurant with his high-strung wife and three slacker children and is expected to air in 2011. Deals are underway for the voice talent, though the pilot presentation featured the voices of H. Jon Benjamin, John Roberts, Kristen Schaal, Eugene Mirman, and Dan Mintz. (Variety)

Kimberly Williams-Paisley (According to Jim) has been cast to topline Lifetime Movie Network telepic Amish Grace, based on a true story about the aftermath that followed the schoolhouse shooting in the Amish community of Nickel Mines, Pennsylvania. Also cast: Matt Letscher (Brothers & Sisters) and Tammy Blanchard (Living Proof). (via press release)

kat said…
I agree that 30 Rock without Baldwin is not 30 Rock. As far as I am concerned, he makes the show. However, I have not enjoyed this season of 30 Rock at all and am considering to remove it from my series recording list. It seems more frantic than funny.
12/01/2009

George Matusek said…
Let's just hope that "30 Rock" remains on air until 2012. With regard to enticing Alec Baldwin to stay, Tina can raise his salary by giving him the salary of unfunny eyesore Judah Friedlander. I'm enjoying this season --- each episode so far has had at least one laugh-out-loud bit (and since I've memorized all the lines in the screwball comedy movies written and directed by Preston Sturges, it takes something special to elicit a LOL from me). My favorite so far was when Tracy, having been kicked out by his wife, showed up at Liz's apartment, plopped down on her couch and demanded, "I want pierogi!" It was especially funny to those of us who are at least partly of Polish ancestry.
12/01/2009

Ailee said…
I don't really understand why Alec Baldwin would want to quit acting when his career has just had new life breathed into it (30 Rock, It's Complicated, The Oscars). I guess there's something to be said about going out on a high note, though.
12/01/2009