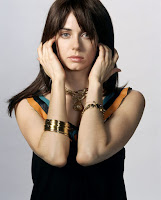 Entertainment Weekly's Michael Ausiello is reporting that Mia Kirschner (The L Word, 24) has been cast in a recurring role on the CW's The Vampire Diaries, where she will play Isobel, described as "the sweet-yet-dangerous wife of Matt Davis’ history teacher, Alaric." Kirschner will first appear in the January 21st episode. (Entertainment Weekly's Ausiello Files)

Starz has renewed drama series Spartacus for a second season, more than a month before the first season even premieres. Season Two of the swords-and-sandals drama, entitled Spartacus: Vengeance, will go into production early next year, with executive producers Rob Tapert, Sam Raimi, Joshua Donen, and Steven S. DeKnight all returning for Season Two. [Editor: Look for former Dollhouse staffers Mo Tancharoen and Jed Whedon to also turn up on the writing staff for Season Two of Spartacus.] (Televisionary)

Over at EW.com, Survivor host/producer Jeff Probst has written about the season finale of the CBS reality series and his belief that the wrong person won the grand prize. "I think Russell was the victim of a jury of bitter people," wrote Probst. "I am not taking anything away from Natalie, she clearly did a great job of reading the group dynamic of the jury and as a result she deserves the money. Oftentimes on Survivor, the vote does come down to a choice where a determining factor is “how nice someone is” but that’s usually when all other criteria being considered is equal. That doesn’t hold up this season. This season was so lopsided in terms of one person (Russell) completely dominating the game that to not give him the money and the title is a bit silly." (Entertainment Weekly's PopWatch)

ABC has given a pilot order to multi-camera comedy Women Are Crazy, Men Are Stupid, about a man and a woman who have been very unlucky in love and hope that their latest relationship will work out. Project, from ABC Studios, is based on a book by Howard Morris and Jenny Lee, who will write the pilot script. (Variety)

CBS has given a pilot script order to CSI creator Anthony Zuiker's cop drama Jax and Amber, which will revolve around two female detectives who "harbor a unique insight into solving crimes," according to Variety's Michael Schneider. Project, from CBS Television Studios, will be written by Elizabeth Devine, who will executive produce with Zuiker and Deran Sarafian (House), the latter of which is attached to direct, should the project be ordered to pilot. Zuiker also has drama Cyber Crimes in development at CBS. (Variety)

Disney XD has given a series order to live-action comedy Pair of Kings, which revolves around a set of fraternal twins (one is white, the other black) who are "raised by their aunt and uncle until they find out that they are heirs to the throne of the island of Kinkou; they relocate there to become kings." Series, which will debut next fall, stars Mitchel Musso, Doc Shaw, Geno Segers, Kelsey Chow, and Ryan Ochoa and was created by Dan Cross and Dave Hoge (Aaron Stone). (Hollywood Reporter)

FremantleMedia North America has promoted Manfred Westphal to senior VP of marketing and communications at the company, which produces American Idol and America's Got Talent. (Variety)