Can't Get "Arrested" in This Town 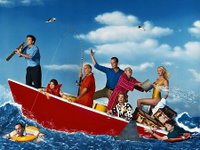 The (possibly) final four episodes of the supremely brilliant comedy Arrested Development are airing tonight, heaped together into a two-hour block. FOX has yanked viewers of this amazing show around for the last three seasons, changing timeslots, pulling it off the air for months at a time, airing the episodes out of order, etc. In other words: typical FOX modus operandi.

Hopefully tonight isn't the last outing of the Bluth family, a family so crazy and self-absorbed that it makes me value my own family that much more. According to USA Today, it's still possible that the show could find another home on ABC (less likely) or Showtime (more likely), as a companion piece to Weeds, but it's not looking good.

Until our prayers are answered (and there are many of us willing to follow the Bluth clan to cable), tonight’s final episodes, which introduce Justine Bateman as Nellie Bluth—a new, secret Bluth daughter—may be the last we see of their topsy-turvy world for a while.

One glitch that’s holding things up on a possible deal with Showtime is whether or not the show’s creator Mitch Hurwitz will stay on with the show.

According to USA Today, Hurwitz says he's interested, but exhausted from the show's labor-intensive editing and wants to take a break before making a move. "I'm really torn,” Hurwitz told USA Today. “It's a really important show to me, but on the other hand, maybe it has lived the life it needs to live. What weighs against it is it's a soul-crushing amount of work."

Come on, Mitch! If Arrested’s Bluths have taught us nothing, it’s that if the ship is going down, you might as well have a drunken, debauched time while it sinks. And hopefully tonight is no exception.

"Arrested Development" airs tonight (in yet another timeslot—possibly its final one) on FOX at 8:00 pm PST.