Everyone here in LA--at least those of us in the TV biz--went crazy over the news a few weeks back that network smallfry, the WB and UPN, were merging into a new, super-sized single netlet called--of all things--the CW, a rather tepid combination of CBS and Warner Bros.' first intials.

Rumors flew about which shows would be saved (please for the love of god, keep Veronica Mars, Gilmore Girls, and Everybody Hates Chris on the air!) and which would be cancelled (One Tree Hill, I am looking at you), giving those of us with not much to do the opportunity to create new combined network fantasy schedules while pretending to look busy at work.

Today's Los Angeles Times Calendar section has an article about the fallout among the networks' program creator/producers--specifically those who have midseason replacement shows about to air--as they battle it out among themselves for those precious pennies of network advertising and promotion money that still remain in the coffers. Which, come to think of it, could be the perfect new show for the CW's fall slate. 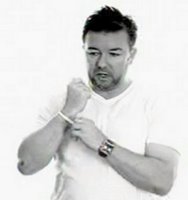 If you get the meaning behind this post's title, you are either a huge Ricky Gervais fan, or you and I are in fact the same person.

There's obviously something Office-related in the air. According to Britain's Mirror, Ricky Gervais and Stephen Merchant will write an episode of the American version of The Office to air next year. And apparently Gervais and Merchant have expressed a desire to do more than just that single script.

Meanwhile, I wait with baited breath that such a creative confluence will occur. It almost seems to good to be true.

Also, congrats to Ricky, Stephen, and Karl as well, for winning the Guinness World Record for most downloaded podcast... ever.