Tuning Out: Why I Stopped Watching "Desperate Housewives" 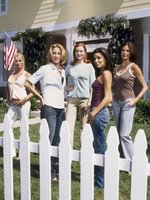 Every now and then I find myself wondering why I continue to watch a particular show, given the lack of satisfaction I get from watching it. Think of it as: When Good Shows Go Bad. For a number of reasons, I find my willing suspension of disbelief nearly impossible and I begin to take fault with tinny dialogue or the believability of characters' actions, and entire storylines begin to become incomprehensible to me.

Such is the case with Desperate Housewives, a show I once tuned in to watch with relish every Sunday evening. Picture it: Autumn 2004, a time filled with the promise of new and exciting shows like Lost, Veronica Mars, and Desperate Housewives, two of which had energized the stagnant ABC and got people talking around watercoolers or coffee pots or wherever people gather nowadays in offices.

At first, Desperate Housewives was a delicious hodgepotch of elements: soapy female-driven domestic drama on one hand, but also a given to pratfalls, arson, same-sex shenanigans, and murder. Hell, the show even gave us a suicide in the pilot's open moments and had the victim, Mary Alice (Brenda Strong, though she was played by Twin Peaks' resident corpse Sheryl Lee in the original pilot), continue to narrate the show from beyond the grave with her now trademark overripe household witticisms.

(Some have even deigned to categorize the show as a comedy and festooned it with all sorts of awards on that account. Personally, I find the matter baffling as the only times I have ever laughed at the show was during Mary Alice's unintentionally tongue-in-cheek narration. But the less said of the show as comedy, the better.)

What was compelled the first season's plots was the mystery surrounding why Mary Alice, perfect wife and mother, offed herself as her four best friends--Gabrielle, Bree, Susan, and Lynette... and sometimes their slutty neighbor Edie--attempted to make sense of the tragedy and figure out who was trying to blackmail Mary Alice and why anyone with teeth that pearly white would risk eternal damnation to get away permanently from Wisteria Lane. Along the way, Teri Hatcher's Susan and Mike continued their on-again, off-again romance (even managing once to sit through dinner when Mike was shot), Lynette struggled with a pack of terrible tots, Bree kept up her icy Martha Stewart-esque reign of perfection, and Gabrielle fooled around with the teenage gardener John behind her husband Carlos' back.

And then something happened. We found out why Mary Alice killed herself: it had something complicated to do with murdering the birth mother of their "adopted" (read: kidnapped) son Zach, who happened to be Mike's son, who shoved down the stairs one Felicia Tillman, the sister of the blackmailer Martha Huber, who ended up being murdered by Mary Alice's husband Paul. Like I said, it was complicated but seemed to make sense--at least in the world of Wisteria Lane--at the time.

With the resolution of that major plotline, much of the oomph seemed to go out of the girls' sails. Mary Alice still continues to narrate the show for some morbid reason, though I would imagine that with the matter of her suicide solved, the poor woman could finally rest in peace and stop haunting the street.

And instead of involved, compelling plots, the writers have instead had Gabrielle face off against a seductive street-smart nun (yes, you read that correctly), had Bree date the pharmacist that murdered her husband and then watch as he slowly died after swallowing too many pills, and introduced a new family on the block: the Applewhites.

Mater familias Betty Applewhite (played by the divine Alfre Woodard) harbors a deadly secret of her own--she keeps a man, presumably her son Caleb (though I will admit I stopped watching before this was made abundantly clear), locked in the basement of their house because he had killed a young girl and Betty feels responsible and therefore must play jailor to her ice cream-loving yet homicidal son.

Meanwhile, the relationship between mismatched lovebirds Susan and Mike, that was so much fun the first year, quickly turned tedious. As soon as the show had Susan, running down Wisteria Lane (in a wedding dress no less) crying to Mike and attempting to apologize to her lover for sending his errant and sociopathic son Zach on a wild goose chase, I knew that their courtship had plateaued and I felt like the one sent on a wild goose chase.

So, for these reasons--and many, many more--I must bid farewell to those women of Wisteria Lane. As Mary Alice might say, "Every week on Wisteria Lane brings with it a new set of lies. That the show can improve, or that Susan will stop sobbing over Mike and tripping over backwards. We persuade ourselves that yes, Bree really would fix Rex's tie as he lies there in the coffin, or that Carlos would never actually catch Gabrielle and John making out. Yes, each week after the show has aired, we lie to ourselves in a desperate, desperate hope that come next week... it will all be better."