From Across the Pond: "Black Books" 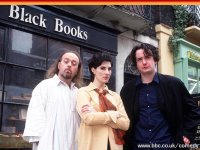 One thing that everyone knows about me is my innate love of everything English. I spent a good deal of time during my childhood in the UK and attended Oxford. In between (and since), I've devoured everything quintessentially British: from novels to films to television over the years--first on good old PBS and then anglophile digital cable fix BBC America.

So I am not quite sure how the delightfully surreal comedy Black Books managed to escape my notice for so long. I caught the first series on DVD (it was just recently released in the States last month) and am enthralled by the bizarro second series, currently airing on BBC America.

Rarely have I ever seen a more bleak portrait of the working world or a more hateful and cruel character than Dylan Moran's grumbling Bernard Black, the owner of the titular London bookstore. Bernard is an anti-social, chain-smoking, drunk misanthrope who owns and "runs" a small, musty book shop. The fact that he has engaged in this particular way of earning a living is a mystery to everyone as Bernard truly hates dealing with members of the public and delights in tormenting his would-be customers.

His only friend in the world is the zany Fran Katzenjammer (Tamsin Greig), who works in the shop next door to Bernard's, which seems to sell only overpriced and unnecessary esoterica (in other words: junk). Fran is of course neurotic and single (read: man-crazy) and, like Bernard, completely eccentric and prone to drinking and smoking too much. The two have a deliciously one-sided friendship wherein neither really listens to anything the other says but they both depend totally upon one another. We've no idea how they met but only know that they've somehow become drinking partners (and Bernard usually has an open bottle or two about) during their many afternoon wine breaks.

Enter Manny. Manny (played by the irascible Bill Bailey) is a downtrodden, hyper-stressed accountant who detests his job and is desperate for a change. Chancing upon Bernard's shop, Manny buys a self-help book called "The Little Book of Calm," which offers such drivel as "When you're feeling under pressure, do something different. Roll up your sleeves, or eat an orange." Through a series of bizarre events, Manny ends up quitting and swallowing "The Little Book of Calm" and ends up in the hospital, where his doctor (played by a pre-Office Martin Freeman) is shocked to discover that the book has disappeared and has been assimiliated into Manny's very being. Manny escapes hospital and walks around London in a daze, a bearded and long-haired man in flowing white robes and sandals, offering advice and serenity to those he encounters ("When you sleep, you are a king surveying your estate. Look at the woodland, the peacocks on the lawn. Be the king of your own calm kingdom").

When Manny is attacked by a group of skinheads outside Bernard's shop, Bernard doesn't rush to Manny's defense in order to save a fellow human being, but rather to get out of doing his taxes due to grievous injury. Leaping into the fray ("Which one of you bitches wants to dance?"), Bernard is quickly beaten to a pulp and his life and shop irrevocably changed.

After the fight, Bernard agrees to hire Manny (with some prodding from Fran) to help him around the shop and Manny moves in with Bernard in the decrepit, filthy apartment over the shop. It soon falls to Manny to try to keep Bernard on the right path as the two become inseparable friends... although more often that not they are usually at one another's throats.

Ultimately, "Black Books" is a show so brilliantly twisted and deliciously surreal that it could have no home on American television.
But perhaps that's precisely what the self-loathing and misanthropic Bernard would have wanted.
"Black Books" airs Friday evenings at 8:00 pm PST on BBC America.