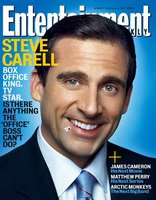 Sometimes you do receive good news in the mail. Kudos to my weekly entertainment fix Entertainment Weekly (that is, when I receive the mag on time) for putting Michael Scott (a.k.a. Steve Carell) and The Office on its cover this week (check your newsstands now). Since moving to its new berth on Thursdays at 9:30 pm last month, The Office has increased its viewership to an average of 9.1 million a week. (It also sits consistently at the top of iTunes' list of most downloaded shows.)

Among the gems in EW's cover story (a fantastic behind-the-scenes feature on the goings-on at Wernham-Hogg), I discovered that supporting cast members Paul Lieberstein (who plays human resources sad sap Toby) and Mindy Kaling--a.k.a. compulsively chatty customer service rep Kelly--also serve as writers on the show (as does B.J. Novak, who plays Ryan, office temp and the object of Michael's ongoing man-crush, but that I've known since the show's inception). Kaling also was responsible for writing and starring in the 2003 off-Broadway play, Matt & Ben, an imagined tale about how Matt Damon and Ben Affleck, er, discovered the script for "Good Will Hunting" (the screenplay literally fell from the ceiling into their laps). In the critically-lauded play, Kaling played a dim, party-boy version of Ben Affleck (so, not really all that different than in real life).

The article also informs the Office-philes among us that, "Adding to the show's clock-punching versimilitude, the set's computers have Internet access, so the actors can blog--as well as send email and pay bills--when they're supposed to be 'working' in the background." (Just like in a real office!)

But the most interesting tidbit of all comes from the show's meek Phyllis. Originally a professional burlesque dancer whose career ended in the 1980s when she was injured, Phyllis Smith (yes, like several of the Office supporting staff, that is her real name) was a casting associate on The Office when they were originally casting the pilot last year. She so amused the producers with her side readings, that they wrote her into the show as an actor.

The cover asks the question, "Is there anything that the 'Office' boss can't do?" After seeing Carell's incredible and vastly different performances in Anchorman, The 40-Year-Old Virgin, and The Office, I know that the answer to the above is a definite no: there's nothing that Carell can't do and as long as Carell keeps acting, I'll keep tuning in. (Hell, even Mr. Brokeback Mountain himself, Ang Lee, called Carell his "hero" recently.)

Of course, Michael Scott's answer would probably be a lot more inappropriate.