Daily to Get "Desperate" After All 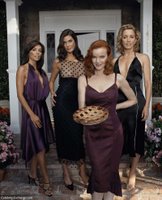 It's moments like these when you just have to gloat and say things like, You read it here first at Televisionary! (No, I mustn't gloat, it's not attractive.)

I had reported several weeks ago about Desperate Housewives showrunner Tom Spezialy walking off the set of the ABC drama and the rumors coming to me about nearly all of the show's writing staff receiving their walking papers. I had also reported on a rumored replacement for Spezialy: former Out of Practice and Frasier producer Bob Daily.

In a rather juicy turn (fitting given the soapy series in question), I can now say that the above rumors have been confirmed as fact.

Variety is today reporting that Daily has signed a deal to join Desperate Housewives full-time as a co-executive producer, replacing Spezialy. Additionally, Joe Keenan, Daily's colleague on Out of Practice (he was the co-creator of the now-cancelled sitcom), and former Will & Grace showrunner Jeff Greenstein are in discussions to join the staff as well. Keenan is in talks to join the series as a co-executive producer and, if his deal comes through, could be bumped to full exec producer later in the season. What Greenstein's role on the series would be is unclear, as the writer is actively developing series of his own for next season.

After what many have described as a truly awful season (complete with critical and ratings backlash), you've got to love it when the behind-the-scenes drama at Desperate Housewives becomes more interesting and entertaining than the show itself.

Anonymous said…
ok, but here is the problem for me. those are all good comedy writers. good choices. But to me, what was really lacking from this season (which I think got MUCH better as the season went on) was the big mystery element.

At first I thought that what was missing was the fact that early on there were no scenes of the four women together. But a couple of weeks ago Q mentioned that what he decided was really missing was the mystery and I thought he was dead on. Last season we had a big thing to cling to.

This season has become too comical, too zany and too many disparate storylines. I think brining on so many comedy writer will unfortunately keep it going down that path.
5/24/2006