Before They Were "Super": Brandon Routh, Kate Bosworth, and James Marsden

It's hardly a surprise that I made a point of seeing Superman Returns this holiday weekend, given an inordinate pre-occupation with all things comics-related and a certain nostalgia for the Christopher Reeves-starring originals. I was actually surprised by how much I enjoyed the film, in spite of Bosworth's rather leaden performance as ace reporter/mommy Lois Lane. But, I couldn't help but be struck (in true Televisionary fashion) by the scene on the left, in which the film's stars--that would be Brandon Routh, Kate Bosworth, and James Marsden--first appear together and how each of them had at one point starred on a television series.

So where exactly did you catch each of these beautiful people on the telly? Let's take a stroll down memory lane and check out the stars of Superman Returns before they were, well, super.

Before tackling The Man of Steel himself, Brandon Routh popped up on a number of television series, including MTV's Undressed (but then again who wasn't on that show) and Gilmore Girls, where he showed up in the series' first season as an attendee at a Bangles concert (you remember, he invited Madeline and Louisa to a party). Routh also spent a year on the daytime soap One Life to Live, where he originated the role of Seth Anderson, a no-good kid from the wrong side of the tracks who tried to turn his life around. In true soap opera fashion, Routh's character showed up in One Life To Live's fictional berg of Llanview as part of a con, pretending to fall in love with Jessica (Erin Torpey). Seth knew that it was his girlfriend Natalie (Melissa Archer), who arrived with Seth as part of the con, and not Jessica, who was the real daughter of Viki Davidson. Seth soon began to develop real feelings for Jessica, but when she learned of his secret relationship with Natalie, he tried to win her back. Aw, sweet.

Before Kate Bosworth surfed some killer waves in Blue Crush and way before she donned a mousy brown wig to play intrepid Daily Planet reporter Lois Lane, Bosworth starred in the short-lived WB series Young Americans, a putative Dawson's Creek spin-off that aired eight episodes during the summer of 2000. In the town-and-gown drama created by Steven Antin, Bosworth played beautiful townie Bella Banks, whose family ran the local gas station, conveniently located next to the snooty Rawley Academy, a boys' boarding school. Bella quickly fell in love with Rawley lad Scout Calhoun (Mark Famiglietti), only to learn that their love affair was star-crossed from the start, as (drum roll please), he's her half-brother. While Young Americans may have only lasted a hand-full of episodes, the series quickly made a star of both Ian Somerhalder (Lost) and Bosworth, though even I could have never predicted that the winsome girl seen here would ever play Pulitzer Prize-winning reporter Lois Lane. 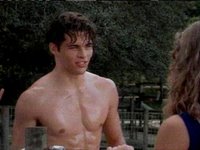 The third member of Superman Returns' love triangle, James Marsden seems to have made a virtual career out of portraying comic book superheroes in feature film adaptations, playing Scott "Cyclops" Summers in all three X-Men movies (though, honestly, he didn't exactly have much to do in X-Men: The Last Stand). But before he played the visored mutant and Lois' earnest fiance Richard White, Marsden starred in a number of television series, including a brief stint on Ally McBeal. But many fans remember him from his early starring role on the short-lived ABC family drama Second Noah, which revolved around married couple Noah, a zoologist, and Jessie, a writer, and the flock of kids they adopted. Marsden played Ricky Beckett, the couple's oldest adopted son, who ended up being (drum roll again, please) their youngest child's biological father. While Ricky got into a number of romantic entanglements and familial conflicts, the storylines were often just convenient excuses for Marsden to get his shirt off. Fortunately, Marsden would go on to star in a number of feature films, including Superman Returns, where his character of Richard White, editor and pilot, would be man enough to not seem to be intimidated by Lois' relationship with Superman. (Now that's a Man of Steel.)

Previously: Before They Were "Lost": Sawyer Vamps It Up on "Angel"

If you missed your Monday night fix of Gordon Ramsay, here's your chance to catch him this week. On tonight's episode of Ramsay's Kitchen Nightmares ("Clubway 41"), Gordon faces one of his toughest challenges yet as he's forced to contend with Clubway 41's owner and self-appointed head chef, Dave, who hasn't cooked in 30 years, and his partner who creates bizarre concoctions like "pork with brie, nectarine and whiskey sauce." (Um, ew.) Will Gordon be able to knock some sense into their heads and save the restaurant?

Anonymous said…
I really, really liked Superman. I thought Kate was pretty good, actually. Especially since I really didn't hold out much hope since seeing her tour de force performance in Blue Crush (though I did see it on an airplane, so I was probably missing some of her nuance). My big problem w/her was that she was WAY too young.

I thought Brandon Routh was pretty damn good, considering I thought he was going to suck.