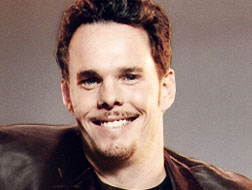 The mini-episodes will only be made available to Cingular customers who also subscribe to HBO Mobile and will be written by Entourage's writers. (In another deal, Cingular customers will be able download full-length episodes of HBO's Entourage, Dane Cook's Tourgasm, Sex and the City, and Curb Your Enthusiasm.)

According to Cingular's official press release, there will actually be a so-called story going on in these mini-installments:

Â“The premise of the made-for-mobile Entourage story is (appropriately): Johnny Drama makes a Â“cellivisionÂ” show. Customers can view a series of short vignettes based on this premise as they continue to enjoy the adventures of the friends from Queens on the Hollywood road to fame and fortune.Â”

Could this be the big break that Johnny Drama has been working for all of his life? Will he finally get out of the shadow cast by his far more successful brother Vincent Chase (whose record Aquaman box office take was sadly bested by Pirates of Caribbeanbean 2, or at least according to CNBC)? Will the term "cellivision" catch on? I sincerely hope not.

(Thanks to Ted of Big Screen Little Screen for the tip.)

In other mini-episode news, today marks the launch of the very first two webisodes ("The Books Don't Balance" and "Phyllis") of The Office: The Accountants starring Dunder-Mifflin's accounting department -- that would be Angela, Kevin, and Oscar -- on the hunt for some missing cash. Check it out at The Office's official home at NBC. I'm already loving these nugget-sized Office eps.