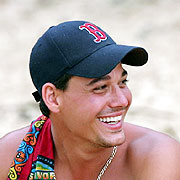 Will Boston Rob try to pull one over on Bigfoot?

Sci-Fi has issued a press release today for its new documentary series Sci Fi Investigates, which will explore mysteries of the paranormal. The six-hour weekly series is being produced in a partnership between Sci-Fi and NBC News Productions and will feature experts and, um, Rob Mariano, a.k.a. "Boston Rob" of Survivor and Amazing Race fame (or infamy, depending on your point of view).

Um, I don't really know what to say in response to this news. To that end, I've included the salient points from the series' official press release below:

PASADENA, Calif. -- July 13, 2006 -- SCI FI Investigates is a new SCI FI Channel series that explores the sweeping and eclectic mysteries and legends that pervade our world. Produced in a partnership with NBC News Productions, this six-part, one-hour weekly series is a real-life X-Files, aggressively exploring the unexplained. Investigations are led by an array of subject-specific authorities including, as was previously announced, Survivor and Amazing Race alumnus and resident cynic Rob Mariano.

Capitalizing on the experience and resources of NBC News Productions, the series and its team of investigators will seek out new evidence by using the latest forensic technology to reveal fresh perspectives on world-renowned mysteries. Today, Thomas Vitale, SCI FI Channel Senior Vice President of Programming and Original Movies, has announced the first group of topics the SCI FI Investigates team will be examining when the series premieres in the fall. They are:

Bigfoot
New sightings are making news and SCI FI Investigates does whatever it takes to secure legitimate evidence of the legendary creature's existence.

Mothman
A real-life nightmare that made headlines around the world, recent sightings of a terrifying winged apparition, known as the Mothman, takes SCI FI Investigates deep into the mountains of West Virginia.

Paranormal Hotspots
As hubs for such uncommon occurrences as UFO sightings, cattle mutilations and unexplained paranormal activity, Dulce, New Mexico and Sedona, Arizona are quite unique. SCI FI Investigates gets to the root of the disturbances that have put these cities on the paranormal map.

The Afterlife
What happens at the moment of death? Evidence has suggested that the human consciousness can function independent of the body. Our team members explore altered states (sensory deprivation, past life regression, etc.) in an effort to find the ultimate truth.

Voodoo
There is more to Voodoo than tales of dolls and pins. To learn the truth about this religion, the SCI FI Investigates team heads to New Orleans to experience its practices first hand."

Wow. Mariano's name is hardly the first one that comes to mind when one thinks about the paranormal. Unless of course, you're thinking about how he managed to get that bus driver to not open the bus doors for the other Race contestants.

No word on whether Amber, Boston Rob's fellow Survivor and Amazing Race contestant and wife, will be appearing on Sci Fi Investigates (you can catch her and Mariano on their new show on the Fox Reality Channel). As for how this couple suddenly seem to have become ubiquitous? Now, that's a paranormal mystery for another day...

Anonymous said…
I just read that he was going to be on the Fox Reality Channel trying his luck at being a professional poker player, too.
7/18/2006

Jace Lacob said…
Yep, he and Amber are on the Fox Reality Channel series together. (Rather than spend the space discussing that further, I simply alluded to it at the end of my post.)