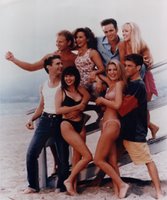 Apparently, I've still got TV on DVD on the brain...

Following my article on TV (Not) on DVD, I asked Televisionary readers which television series they were most anxious to have released on DVD and the answers were surprising. Quite a few votes for some of my selections (why, oh, why isn't Andy Richter Controls the Universe available yet?), and a few interesting choices as well.

The general consensus is that, while lots of series have made it onto our shelves in that handy digital format, there are still quite a few beloved programs which haven't yet made the leap.

I went to the source. Or, as close to the source as I could get. TVShowsonDVD.com's Gord Lacey is the expert on this issue and, via a rapid-fire email exhange, I asked him for some answers on what's going on with your favorite shows. Without further ado:

Gord Says: "Paramount/CBS announced plans to release 90210 overseas (Australia), but nothing here yet."

Gord Says: "Grosse Point was announced, then pulled from release in order to release it at a better time (no clue what that means)."

Gord Says: "Twin Peaks season 2 should be coming in November; that's all we know about right now."

Gord Says: "The guys behind The State keep saying the DVDs are coming, but they've been saying that for a few years and the people at MTV have said nothing has been started on them."

What about my man Ticknart's favorite, Daria?

Gord Says: "A Daria [release] would be a problem because of all the music used in the show."

Gord Says: "As for the others... no word on them coming out, or why they haven't been released yet."

But fear not, studios are always liable to change their minds if they see that there's enough fan interest to warrant a particular release. So what can you do? Log on to TVShowsonDVD.com, register, and cast a vote for your favorite show, whether you want the series released in a "best of" format, season box sets, or individual episodes. And keep checking Gord's site, TVShowsonDVD for updates.

And who knows? We might soon find ourselves watching DVDs of Andy Richter Controls the Universe, Thirtysomething... or the entire Gross Point series that so many of us have been jonesing for. Fingers crossed.

If you missed Friday's Stateside airing of the hilarious and surreal 1999 sitcom Spaced (starring Shaun of the Dead's Simon Pegg), here's your chance to catch the fourth episode before another episode airs Friday. On tonight's episode ("Battles"), Daisy wants to get a dog, while Tim meets his ex's new boyfriend.

Another chance to catch the second episode before a new episode on Friday. On tonight's episode, Mark, still despondent over losing Sophie, makes a new friend at the office, while Jeremy meets an old friend, one he used to bully, who invites him to work on his latest indie film.

I know, it's on Lifetime of all places. The improvised comedy returns with a new episode tonight ("Lydia's Last Night"), in which Lydia (the superlative Wendi McLendon-Covey of Reno 911!) is fearful that Phillip, her married boyfriend, will hurt her after she threatens to tell his wife about their twenty-year affair. Tune in for Wendi McLendon-Covey, stay for Jane Lynch.

Anonymous said…
I can't believe they haven't released "Melrose Place" or "Beverly Hills 90210" yet. What are they waiting for? Another one of Kimberly's rage blackouts?
7/10/2006

Anonymous said…
Thirtysomething is long overdue. Not releasing the 3rd season of Once and Again has been kind of cruel.
7/10/2006

Anonymous said…
Good list. Lots of crossover with
a list that I did on my site a couple of months ago.