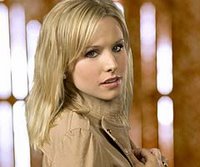 One of the highlights of my trip to Comic Con had to be the Veronica Mars panel on Saturday afternoon. It's no secret that Veronica Mars is easily one of my favorite series on television and that the day the execs decided to grant the noir drama a reprieve was one of the happiest of my life. (Now if we could only get them to commit to 22 episodes.)

In attendance: Kristen Bell, creator Rob Thomas, a tardy Francis Capra (he was stuck in traffic), Jason Dohring, Michael Muhney, Enrico Colantoni, and Ryan Hansen. The crowd went wild as a clip package -- the same one presented to the CW programming execs -- was played that brilliantly summed up the show as a cross between a stylish noir drama and a snarky well-written drama. But the surprises were yet to come...

Who knew that Rob Thomas always had Cassidy Casablancas in mind as the killer, way back when he brought him onto the show for the last three episodes of the first season? Or that he felt he "sold out a little bit" by bowing to fans' "vitriolic" response to Jackie by making her too nice too quickly? Or that Kristen Bell's agent still sends her mail at her old address? (Some VM fans that live there now brought the delighted Kristen Bell a box that had been sent there in error. Some assistant somewhere is getting fired this morning.) Or that Ryan Hansen can not only do a mean Michael Jackson imitation, but can also perform an impromptu backflip with wild abandon?

So what can fans look forward to in Season Three? Veronica and bad boyfriend Logan are "still going strong." Well, Veronica's off to Hearst College, but she'll still be living in her old bedroom in the Mars family home. ("And that's where she'll die," joked Enrico Colantoni.) One reason for the living arrangement was that Thomas didn't want Veronica to have to drive home (or Keith to drive to Hearst) every time they wanted the father and daughter to have a conversation. (Hmm, was that a dig at timeslot companion Gilmore Girls, who did just that during its first Yale-era season?)

Joining the cast in on a full-time basis is Michael Muhney, whose Sheriff Lamb will continue to be a thorn in Veronica's side. "He's the guy you love Veronica to butt heads with," said Thomas. There will continue to be crimes in the sunny berg of Neptune and Veronica will investigate and undoubtedly run into Lamb. (As for his much-younger girlfriend Madison? "Um, she's gone to USC," joked Thomas.)

As previously reported, Tina Majorino has also joined the cast of Veronica Mars on a full-time basis as well. (Can I just say, WAHOO!) Mac will be attending Hearst College with Veronica, Wallace, Dick, and Logan. New characters include Mac's roommate Parker (Dodgeball's Julie Gonzalo) and Wallace's roomie Piz (Life as We Know It's Chris Lowell).

Season Three won't have a single overall mystery like in previous seasons, but will instead be comprised of three shorter story arcs that will air "unbroken by repeats or pre-emptions," said Thomas to a cheering crowd, and each mystery will have a different feel. However, the show will also emphasize the mystery-of-the-week element, in an attempt to bring in new viewers, a network mandate. (Let's just hope that it's handled better than when Alias tried to do the same and ended up alienating much of its core audience.)

Veronica Mars' third season will kick off on Tuesday, October 3rd, with a nine-episode arc that will pick up the mystery from episode 16 of the second season (the serial rapist on the Hearst College campus). On Friday, producers had locked Arrested Development's Alia Shawkat to return to the series (look for her to pop up in episode four) and had wanted to bring back her AD kissin' cousin Michael Cera, but Cera had recently booked a movie and is currently unavailable. However, Rob Thomas has said that they are working on figuring out a way to get Cera to make another appearance. Additionally, guest star Charisma Carpenter (Kendall Casablancas) will be showing up in episode one.

Also in episode one: Dick Casablancas (Ryan Hansen) dancing in a Speedo.

Expect life in Neptune to be a little less stratified at Hearst College than it was in high school, where instead of the '09ers, there will be little pocket communities of frat boys, student publication people, etc. Says Rob Thomas, it's more about "fiefdoms rather than us and them." While Veronica might feel like less of an outcast as she did at Neptune High, don't expect her to exactly become Miss Popular either. Episode Two features Veronica going undercover at during sorority rush week. (I think that speaks for itself.)

As for Kristen Bell, she's hoping that Veronica will become a little more vulnerable through her own decisions at college. She's been hurt by so many people, including her no-good mother, and Bell wants Veronica to remain "feisty, but dropping her guard a little."

Has the move to the CW affected the storylines on the series? According to Thomas, the netlet has stressed that they want Veronica "to be a good companion piece to Gilmore Girls," which elicited more than a few boos from the crowd. Scarily, the network did have thoughts on storylines that they thought to be "too dark," which made them especially nervous as the show airs after the more cheerful Gilmore Girls. The best line of the panel goes to Francis Capra who uttered, "Don't ask me where you'd see a guy like me on Gilmore Girls." Ah, Weevil, one of the reasons we love you is that you're always willing to speak your mind.

Rob Thomas is currently negotiating a deal to stay on Veronica Mars for the foreseeable future but one sticking point that hasn't been worked out yet is that Thomas wants to retain the book rights for Veronica Mars. Thomas, who got his start as a novelist, doesn't want "cheesy Veronica Mars books out there." I couldn't agree more but I'd love to see a Veronica novel -- written by Thomas himself -- sometime in the future.

One tidbit not revealed at the Comic Con panel: Joan of Arcadia's Patrick Fabian has been cast as a college professor on the show.

How I know that is a mystery for another day...

If you missed Friday's Stateside airing of the hilarious and surreal 1999 sitcom Spaced (starring Shaun of the Dead's Simon Pegg), here's your chance to catch the sixth episode before another episode airs Friday. On tonight's episode ("Epiphanies"), Tim's friend drops by to invite Tim and Daisy out for a night of clubbing and they invite Mike, Brian, and Twist to join them. Something tells me it's not as simple as that.

Another chance to catch the fourth episode before a new episode on Friday. On tonight's episode, Mark attempts to forget about Sophie by dating April, but manages, in typical fashion, to become her stalker rather than her boyfriend. Meanwhile, Jeremy joins a band but has a hard time convincing everyone that he's not a roadie.

See above. On tonight's installment of the FOX culinary competition show ("5 Chefs"), some of the chefs get jealous when Gordon takes a few of them with him to Las Vegas to see how the new restaurant is looking. Gee, do you think that the show's producers wanted to, you know, create more tension between the remaining contestants?

It's the series premiere of this twisty new detective drama that's unlike anything else on television. After the disappearance of his girlfriend and colleague, Detective Sam Tyler (State of Play's John Simms) goes after the serial killer he believes has kidnapped her. But when he's involved in a near-fatal car accident, Sam Tyler wakes up and discovers that he's been transported back in time to the year 1973. Can he save his girlfriend in the present from more than thirty years in the past? It's trippy, it's British; do yourself a favor and tune in.

Anonymous said…
Love VMars - thanks for the recap.

Jace Lacob said…
I really enjoyed the pilot for "30 Rock" (you can catch my review at http://televisionary.blogspot.com/2006/05/pilot-inspektor-nbcs-30-rock.html). While it's far from perfect, it's a fun little comic trifle. As for Fey leaving SNL to do it, I don't really see how she can do both, given the grueling production schedule of a single-camera show.
7/24/2006