I don't know about you, but I've been jonesing for another Top Chef fix ever since the first season of Bravo's culinary challenge wrapped a few weeks back. Sure, we've been following the behind-the-scenes shenanigans with the show (android Katie Lee Joel out, Padma Lakshmi in) and we know that the sophomore season will take place in Los Angeles this time around, but what's in store for Top Chef 2?

Fret not, fearless foodies! (I saw Stan Lee down at Comic Con, so forgive the exclamatory address.) Televisionary knows how much you love your Bravo reality shows and we've got a sneak peek at some images from the second season of Top Chef, courtesy of top secret Televisionary operative "Ted Kord," including the first photo of new host Padma Lakshmi in action (above, looking rather, um, model-esque).

Top Chef was on hand filming an episode of the series, set to debut in October on Bravo, and as usual contestants -- grouped here into two teams -- were competing in the elimination challenge. This is it, ladies and gents. Feast your eyes on the newest competitors for the (dubious) title of Top Chef: 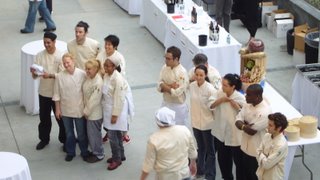 And here are our erstwhile Top Chef competitors in action. Seen here, it's "Team Vietnam": 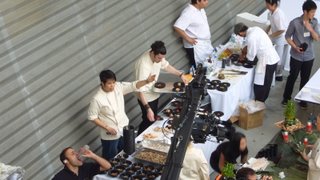 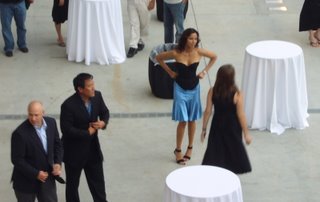 While Bravo reality junkies might have Project Runway to tide us over (how the bloody hell does Angela keep managing to escape the chopping block?), October seems like a long ways off to have to wait for more Top Chef.

So who are our newest Top Chef wannabes? Bravo's keeping mum for now but I can't help but wonder: Will there be another overbearing Stephen in the bunch? Or a humble Lee Anne? Or a modest Harold? Or, better yet, another, um, Tiffani? Only time will tell...

On tonight's repeat episode ("Monkeys in Space"), Earl must make up for telling an inappropriate story at a birthday part for his old friend Hank (Carnivale's Tim DeKay) by giving Hank one perfect day before he is sent to prison. Karma's a funny thing.

On a repeat of The Office ("Boys and Girls"), Michael orders his male employees to have some bonding time in the warehouse after Jan schedules a "women in the workplace" seminar. Features Dwight's memorable analogy to the Others on Lost and, less amusingly, an emotional breakdown from Pam when she realizes that she'll never escape Scranton.

Catch the premiere episode of this 2004 British import tonight on Sci-Fi. In the premiere ("Once Upon a Beginning"), a new doctor at Darkplace Hospital receives a psychic warning from a cat. (Yes, you read that correctly.) A half an hour later, it's the pilot episode of Sci-Fi's new animated series Amazing Screw-On Head from the brilliant mind of Mike Mignola (Hellboy). David Hyde Pierce voices Screw-On Head, a robotic secret agent robot in the employ of Abraham Lincoln. (Um, again, you did read that correctly.) Paul Giamatti, Patton Oswalt, Molly Shannon, and Mindy Sterling also provide voices.

Anonymous said…
Seriously - Angela must have a pact with Tim Gunn or something - how does she keep staying?
7/27/2006

Jeremy said…
The Blue Beetle is taking photographs for you from beyond the grave?